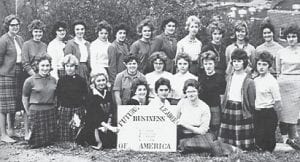 ’On The Hill’ with Jimmy Brown: Big things have been happening on the Hill this week! A beautiful new trophy has been added to our already well-filled trophy case. It was presented to our band at the Big Sandy Bowl Band competition last Saturday at Paintsville for the best show band. This means that our band, under the direction of Mr. Frank Bickel, was the best playing, best marching, and best directed band present. Congratulations to a working group.

A trophy will also be presented to our football team as runner-up in the Eastern Kentucky Mountain Conference. Whitesburg upset Elkhorn City last Friday night by a score of 53 to 6! That’s the old spirit, boys. We knew you could do it all the time.

Basketball practice started this week and hearsay has it that ‘sixty’ freshman and sophomore boys were out to try for the B team. With that kind of spirit, I don’t see how we can fall short of the state finals. This means of course, with the help of our fine head coach, Gobel Ritter, and his able assistants, Stephen Carroll Sexton and U.G. Horn. 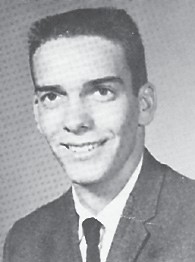 Additional pictures were also made this week for the “Yellow Jacket”, our school annual, which promises to be one of the best ever published by the school.

We were really “shook up” last week by the Cuban situation. After all, many of us will soon be eighteen, the magic number at which we will be allowed to vote and fight for our country!

The Whitesburg football team and cheerleaders went to Morehead Saturday to see MSU vs. Western. The score was Morehead 0 and Western 7. Coach Penny of Morehead met two of our star players, Jimmy Stamper and Delano Thomas.

The senior class had concession stands at the polls all over Letcher County Tuesday, Nov. 6.

Our Whitesburg Pep Band will be playing at a dance Saturday night which will take place at the V.F.W. Club in Whitesburg. The time for the dance will be from 9 p.m. to 1 a.m. Everyone is invited. 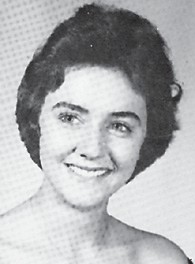 The F.T.A. Club is very active this year. They have 103 members under the capable leadership of James Willey Craft. They are continuing their student aide project and will be working soon on two more projects, reconditioning used toys for Christmas presents to the needy children and providing a F.T.A. newsletter to the school on recent school news. 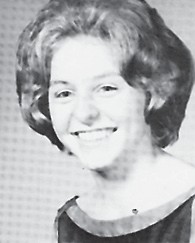 Activities so far have included a faculty panel on how school policy is formulated, a sing-a-long session and the movie “A Desk for Billie.” They have many interesting programs planned, such as making puppets and musical instruments for the trainable class, making posters and bulletin boards, and how to work on record lists.

&lt;b&gt;Mrs. Christine Gatton and the shorthand II class have organized a new club at W.H.S. and it is called the Future Business Leaders of America, which is a national organization.

The F.B.L.A. has thirteen seniors who are in the advanced shorthand class, and fourteen juniors who were chosen for their high standings in typing and shorthand. The officers are: Lorene Combs, President; Jackie Walker, Vice President; Saundra Whitsome, Secretary; and Terry Combs, Treasurer.

‘Sweetheart of the Week’

Beauty and brains do go together, students and teachers at Whitesburg High School will tell you.

And for proof of their argument, they point out Vicki Moore, the Courier-Journal’s ‘Sweetheart of the Week.’

“She’s tops,” said one student. “Real popular with everyone” another remarked. “ Looks and personality” added a third.

Vicki’s teachers, however, see her in a different perspective.

“She’s a leader here in school,” said one instructor. “She gets things done in a pleasant manner,” remarked another. To the schools faculty, the “total Vicki is an honor student who combines her beauty and brains in a pleasant personality.”

Vicki, 15, is the daughter of Mayor and Mrs. Ferdi- nand Moore, of Whitesburg. A junior, she is captain of the school’s cheerleaders and an avid water skier and an accomplished pianist.

When she finishes high school, she wants to complete college and become a chemistry teacher.

This past summer, she was the only student among 20 nominees from Whitesburg accepted for a science scholarship at Murray State College. The scholarship — paid for by the National Science Foundation — provided her with eight weeks of intensive study in chemistry at Murray.

She’s a member of the Science Club, Pep Club and the Tri-High-Y. And as can be guessed, she’s eligible for membership in the Beta Club, an academic honorary.

The Black Kat Staff and advanced shorthand II class proudly present the winners in the Popularity Poll of the senior class of 1963. You’re got it — now keep it — doggone you, don’t lose it — your place in the class of 1963.