The big night finally arrive — the one we had been waiting as eagerly for so long — May 16 — the Junior- Senior Prom. With all the lovely girls, the handsome boys and the beautifully decorated gym, which carried out the theme, “Three Coins in a Fountain,” which made the event one long to be remembered.

At 10 p.m. the big surprise came which we had been waiting for, the announcement of King and Queen of the 1964 prom. The juniors chose for senior king, tall, dark and handsome Ricky Banks and for queen, beautiful brown-haired, greeneyed Sharon Bentley. Everyone was pleased with the decision because they are very well liked by everyone on the campus and they make a very nice steady couple. Ricky belongs to the W Club; Student Council and is vice-president of the Science Club. Sharon is president of the F.B.L.A. Club. 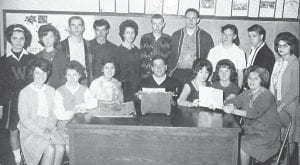 Reverent silence was the order of the day for the seniors of 1964 at their Baccalaureate sermon Sunday night, May 17, which was held in the grade school auditorium. The message was ably delivered by the Reverend Charles Q. Carter of the Baptist Church. The invocation was offered by the Reverend Gary Bowker and Reverend H.M. Wiley pronounced the benediction. Appropriate music was furnished by the high school chorus under the direction of Mr. Gatton. All of the seniors were deeply moved and inspired by the message and the event.

Winners of the shuffleboard tournament

My Four Years at W.H.S. by Allene Hatton: If I had not started in high school and attended the four years, I would have missed the best four years of my life. I would never have met the dear friends and teachers who have meant so very much to me.

My school is dear to me and I have been loyal to its name. So I say, “Long live old Whitesburg High, and all its students and faculty.”

Senator John Sherman Cooper, commencement speaker for Class of ’64: In celebration of the golden anniversary of the founding of Whitesburg High School, the seniors are highly honored to have the Honorable John Sherman Cooper as their commencement speaker. The United States Senator is a native Kentuckian born in Somerset. He is a graduate of Centre College, Harvard Law School, Yale University, and holds many honorary degrees. He was one time ambassador to India and Nepal. He served as captain during World War II. He is greatly interested in education and serves as board member of the University of Kentucky and Georgetown College.

Aileen Adams and Barbara Pratt were chosen second vice president and secretary, respectively, of the State Distributive Education Club. They attended a breakfast and convention recently in Louisville with their sponsor, Mr. Warren Combs.

Whitesburg High School cafeteria blessing: For this meal which Thou hast given, for the fellowship of those about us, for Thy love and care which surround us, we offer our thanks. Amen. Thus read the little cards on our lunchroom tables, provided by Mrs. Brown, our lunch director. She also adds a bit of interest to our meal as we stand in line and look at the items of interest from the daily newspaper, and the beautiful copies of works of art placed around the walls. Teachers on duty keep the students in line and on good behavior. She tries to make our menus tempting by giving them names suggestive of the seasons and holidays. “She is friendly and kind, nice, neat and pretty. She makes lunch time a lot brighter.” “Our food is properly prepared and well balanced as to diet.”

Some of the seniors’ parting advice

Allene Adams – Be good but have fun. Barbara Adams – Eat, drink, and be merry because tomorrow you may have to pay all of your senior debts. Carolyn Adams – Study and have lots of fun. Bruce Adams – Don’t get in debt. Michael Adams – Have a big party. Patricia Adams – Always remember – Have faith and trust only in God. Ellen Armstrong – Be good and have fun, but study on the sideline. Harold Bates – Get your license before you drive. Sonja Boggs – Have fun, but study hard. Tootie Brashears – Skip, but be careful and don’t get caught. Patsy Brown – Be kind to your teachers and other students. Stay in school and get an education. Bobby Collins – Don’t pay debts without getting a receipt. Sherry Conatser – Really work hard and get the best out of your high school days. You only have them once. Kelsey Day – Have fun and don’t mess around with other girls and boys. Rokie Frazier – Do all you can but be sure you can get by with it. Ty Hall – Keep your nose clean and don’t let Coach Ritter catch you between fourth and fifth period sneaking into the English Building. Coy Holstein – Don’t sweat the small stuff. Jack Howard – Study real hard and don’t drop out of school — it’s fun. Shade Jones – Take everything you can get today, tomorrow may not get here after tonight. Vickie Moore – Don’t go steady in your senior year. There’s too much meanness to get into. Paul Price – If at first you don’t succeed, try, try again. And it’s later than you think. Mahala Reynolds – Study hard, have fun. Jimmy Sturgill – Study hard and make something of yourself. Jerry Williams – Study. Darius Wright – Finish school and don’t goof off. Darrell Holbrook – Have fun and join the band.

From the desk of the principal

Another year draws to an end! The year 1964 will be memorable because it is the 50th anniversary of the founding of Whitesburg High School. We were highly honored to have United States Senator John Sherman Cooper as our commencement speaker. The year has been full of activities enjoyed, lessons taught, books read, papers written, tests taken, work accomplished, honors received, awards given, conventions attended, ball games won and lost, some disappointments, some sorrows, but for every cloud there has to be a silver lining. It is with a great degree of satisfaction that we look back over our past year and with much anticipation that we face the future. Jack M. Burkich.

Thanks from Ty Hall

Though I’ve only been at Whitesburg High less than two years, I’ve learned a little about its students and its heritage. The students seem to take an honest pride with an air of dignity in attending our fair school. Though the pep sessions are not always up to par, you can tell the school’s true colors when we stand and sing, “On, Old Whitesburg,” or “Hail, Whitesburg High School, Praise to thy name,” our alma mater. I’ve enjoyed going to school here and especially have loved playing ball with all the boys. Though I am not originally from here, I’m proud to be a part of this school, and one of the proudest days of my life will be my graduation from this school with all the gang I’ve known and loved.

(The information in this article is from the May 1964 Black Kat.)

I would appreciate getting copies of any old Black Kats for use in this column. I am especially interested in issues from the late ‘60s, ‘70s and the ‘80s. My email address is: bennett.welch@gmail.com and mailing address is: Bennett Welch, 1638 Hwy. 2035 Whitesburg, Ky. 41858.