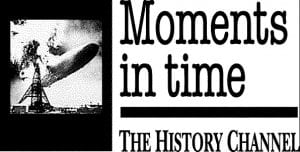 • On Sept. 16, 1620, the Mayflower sails from Plymouth, England, bound for the New World with 102 passengers. Although headed for Virginia, stormy weather and navigational errors forced the Mayflower off course. On Nov. 21, the Pilgrims reached Cape Cod at what is now Provincetown, Massachusetts.

Arnold meets with British Major John Andre to discuss handing over West Point to the British, in return for money and a position in the British army. The plot was foiled and Arnold became synonymous with the word “traitor.”

• On Sept. 19, 1957, the United States detonates a 1.7 kiloton nuclear weapon in an underground tunnel at the Nevada Test Site, 65 miles north of Las Vegas. It was the first fully contained underground detonation and produced no radioactive fallout.

• On Sept. 18, 1973, future president Jimmy Carter files a report with the National Investigations Committee on Aerial Phenomena, claiming he had seen an UFO in October 1969. Carter and other witnesses described the object as “very bright [with] changing colors.”

• On Sept. 22, 1985, the first “Farm Aid” concert is held in Champaign, Illinois, started with an offhand remark made by Bob Dylan. The Farm Aid organization has since raised more than $33 million to support small-farm owners.

• On Sept. 17, 1996, talk show host Oprah Winfrey launches a television book club and announces “The Deep End of the Ocean,” by Jacquelyn Mitchard, as her first selection. Since then, Oprah’s Book Club has catapulted dozens of little-known books onto best-seller lists.