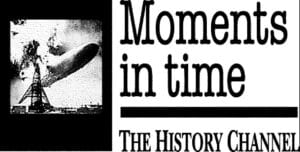 • On June 18, 1812, the day after the Senate and the House of Representatives vote to declare war against Great Britain, President James Madison signs the declaration into law — and the War of 1812 begins. It was partly in response to the forcible induction of American seaman into the British Royal Navy.

• On June 15, 1846, Great Britain and the U.S. sign the Oregon Treaty, establishing the U.S.-Canadian border as the 49th parallel from the Rocky Mountains to the Strait of Georgia.

• On June 16, 1884, the first roller coaster in America opens at Coney Island, in New York. Known as a switchback railway, the roller coaster traveled at approximately 6 mph and cost a nickel to ride.

• On June 19, 1905, some 450 people attend the opening day of the world’s first nickelodeon, located in Pittsburgh. The storefront theater boasted 96 seats and charged each patron 5 cents to view live vaudeville acts as well as short films.

• On June 17, 1958, the Second Narrows Bridge, being built to connect eastern and northern Vancouver in western Canada, collapses, killing 59 workers. The bridge rose 175 feet above the water.

• On June 20, 1975, “Jaws,” a film directed by Steven Spielberg that made countless viewers afraid to go into the water, opens in theaters. The story of a great white shark that terrorizes a New England resort town became an instant blockbuster and the highest-grossing film ever at the time.

• On June 21, 1982, John W. Hinckley, Jr., who on March 30, 1981, shot President Ronald Reagan outside a Washington, D.C. hotel, was found not guilty of attempted murder by reason of insanity. Hinckley’s defense argued that he was obsessed with the 1976 film “Taxi Driver” and the lead actress, Jodie Foster. Hinckley was released from the mental institution in 2018.