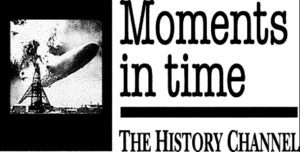 • On Nov. 21, 1877, Thomas Edison announces his invention of the phonograph, a way to record and play back sound. Although initially used as a dictating machine, the phonograph proved to be a popular tool for entertainment. Edison acquired an astounding 1,093 patents in his 84 years.

• On Nov. 19, 1915, British airman Richard Bell Davies performs a daring rescue, swooping down in his plane to whisk a downed fellow pilot from behind Turkish lines just as a group of enemy soldiers approached.

• On Nov. 20, 1945, in Nuremberg, Germany, 24 high-ranking Nazis go on trial for atrocities committed during World War II. The defendants faced charges ranging from crimes against peace, to crimes of war, to crimes against humanity.

• On Nov. 17, 1970, the court-martial of 1st Lt. William Calley, an Army platoon leader, begins. Calley had led his men in a massacre of 200 Vietnamese civilians, including women and children, at My Lai, South Vietnam. Calley was found guilty and initially sentenced to life imprisonment. He was paroled in 1974.

• On Nov. 18, 1987, a fire in a London subway station kills 30 commuters and injures scores of others after people began to smell smoke coming from beneath one of the King’s Cross station’s escalators. It was later revealed that debris and grease had built up under the escalator.