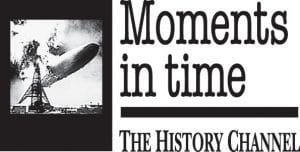 • On Sept. 25, 1789, the first Congress of the United States approves 12 amendments to the U.S. Constitution, and sends them to the states for ratification. The amendments, known as the Bill of Rights, were influenced by the English Bill of Rights of 1689.

• On Sept. 23, 1846, at the Berlin Observatory, German astronomer Johann Gottfried Galle discovers the planet Neptune. The blue gas giant, which has a diameter four times that of Earth, was named for the Roman god of the sea. It completes an orbit of the Sun once every 165 years.

• On Sept. 21, 1938, without warning, a powerful Category 3 hurricane slams into Long Island and southern New England. All told, 700 people were killed by the hurricane, nearly 9,000 homes and buildings were destroyed and nearly 3,000 ships were sunk or wrecked.

• On Sept. 26, 1945, Lt. Col. Peter Dewey, a U.S. Army officer with the Office of Strategic Services (OSS) in Vietnam, is shot and killed in Saigon. Dewey was the head of a seven-man team sent to Vietnam to search for missing American pilots. He was the first of nearly 59,000 Americans killed in Vietnam.

• On Sept. 22, 1953, the first four-level (or “stack”) interchange in the world opens in Los Angeles, at the intersection of the Harbor, Hollywood, Pasadena and Santa Ana freeways. It consisted of 32 lanes of traffic weaving in eight directions at once. Today, the interchange’s cost of $5.5 million would pay for just 250 feet of urban freeway.