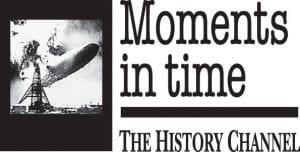 • On June 25, 1915, the German press publishes an official statement from the country’s war command addressing the German use of poison gas at the start of the Second Battle of Ypres two months earlier. The Germans had fired more than 150 tons of lethal chlorine gas against two French colonial divisions in April, claiming the French had first used gas in August 1914.

• On June 23, 1927, The Sioux County Pioneer newspaper of North Dakota reports that President Calvin Coolidge will be “adopted” into a Sioux tribe at Fort Yates on the border of North Dakota. At the Sioux ceremony, photographers captured Coolidge, in suit and tie, as he was given a grand ceremonial feathered headdress.