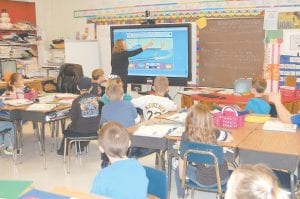 While teaching a lesson on relative position, motion and speed, Sharie Bailey, a third grade teacher at West Whitesburg Elementary School, used an InFocus Mondopad Monday morning to show her students how different types of flooring affect the speed of a car. Each school in the Letcher and Jenkins school districts received a 55-inch touch display and a classroom set of tablets through an Appalachian Renaissance Initiative grant obtained by Kentucky Valley Educational Cooperative (KVEC) and funded by U.S. Department of Education. (Photo by Sally Barto)

West Whitesburg Elementary School teacher Sharie Bailey used a 55- inch touch display screen Monday morning to show her students what activities on an educational website she wanted them to complete. Instead of having 20 students crowd around a small computer screen, students watched and listened to instructions while sitting at their desks. Bailey, who demonstrated the task on an InFocus Mondopad, picked students one at a time to show the class how to do a specific activity on the large screen.

“ It puts things on a hands-on approach,” said Bailey.

Once the class was given assignment instructions, students began working on different tasks. A handful worked on the website assignment on classroom computers. Students rotate stations and by the end of the week, each student in the class will have had the opportunity to complete the computer activity.

Earlier in the school year, Bailey used the camera connected to the Mondopad to record students reading narratives. She uploaded the video clips to the class website so parents could view them.

“It allows me to take what I am doing in the classroom and showcase it to parents,” said Bailey.

The Mondopad has a small camera in each corner of the screen and can be used as a whiteboard to write on. With the large camera located on top of the screen, the Mondopad can also be used to conduct video conferences.

“It’s another avenue for kids, especially those who are visual learners,” said Isaac.

The Mondopad is mobile and teachers take turns using it in their classrooms.

Each school in the Letcher and Jenkins school districts received a Mondopad and a classroom set of tablets through an Appalachian Renaissance Initiative grant funded by the U.S. Department of Education.

“We care about our kids and we care about the skills they need to know to be successful in this global economy,” Jeff Hawkins, executive director of KVEC, said in a press release. “We know that each child has a different set of strengths and skills and they learn differently. Therefore, our goal is to personalize and tailor the learning to the child and use a variety set of tools, including advanced technology, to make this happen in and outside the classroom.”

With the Appalachian Renaissance Imitative, learning shouldn’t be limited to a textbook, but rather reform teaching and bring it to the 21st century, said Asst. Letcher Schools Supt. Twyla Messer.