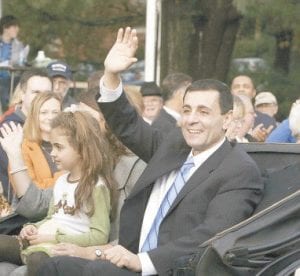 Lt. Gov. Daniel Mongiardo, shown during the inaugural parade for Gov. Steve Beshear in Frankfort in 2007, will seek the Democratic nomination for the U.S. Senate. (AP Photo)

Days after U.S. Sen. Jim Bunning filed a lackluster campaign finance report, a prominent Kentucky Democrat announced that he will run for the two-term Republican’s seat in 2010.

“The people of Kentucky deserve a senator that has the vision, energy and record to help improve our state and country,” Lt. Gov. Daniel Mongiardo said this week in a statement.

A longtime physician in Hazard, Mongiardo is the first to formally announce his intentions to challenge Bunning, although at least two others have said they are considering the race.

Bunning said in a statement he looked forward to taking on whoever wins the Democratic primary.

Mongiardo on Monday said he will file the necessary paperwork later this week, setting up a possible rematch with Bunning, a 77- year-old baseball Hall of Famer. Bunning eked out a win in 2004 when Mongiardo, then a littleknown state senator, came within about 23,000 votes of unseating him. With the improved name recognition, Mongiardo said he would be an even more formidable candidate.

Bunning has said he would need to raise about $10 million to win re-election to a third term. Bunning filed a campaign finance report last week that listed only $27,357 in financial contributions between Oct. 1 and Dec. 31. The report showed Bunning had $150,000 on hand.

In an interview with The Associated Press earlier this month, Mongiardo taunted Bunning, saying he fully expects the senator to retire rather than face him again. Mongiardo continued the tough talk Monday.

“We have a senator who is simply not getting the job done,” Mongiardo said in a statement. “He offers no ideas, no actions and no solutions. I believe today, as I did in 2004, that Jim Bunning continues to fail the people of our Commonwealth. Kentucky’s families deserve better.”

Attorney General Jack Conway and state Auditor Crit Luallen, both Democrats, also are considering entering the race and that they will announce their decisions by spring.

Luallen said she intends to make her decision soon and Conway said he will make his decision early this year.

U.S. Sen. John Cornyn, RTexas, who heads the National Republican Senatorial Committee, told reporters last week that Bunning is among several GOP incumbents who will be vulnerable in the next election.

The move, Voss said, could keep some other prominent Democrats out of the race. But, he said, it has its drawbacks.

“Setting yourself up very quickly as the Democrat to beat means you’re the target of criticism both from Republicans trying to wound the likely enemy but also from Democrats who might desire the same position.”

Mongiardo, elected lieutenant governor just over a year ago, said he made the decision to run for Bunning’s seat based on a desire to improve health care.

“I have made fixing our broken health care system my life’s mission,” Mongiardo said. “I understand and see every day how the cost of health care is burdening families and damaging the ability of businesses to compete, to grow, and to create jobs.”

His decision to challenge Bunning means Gov. Steve Beshear will have to choose a new running mate for his 2011 re-election bid. Before he can begin fundraising, Beshear has to name his running mate.

Beshear spokesman Jay Blanton said the governor is not ready to discuss who his running mate will be.

Beshear said in a statement that Mongiardo would be an outstanding senator.