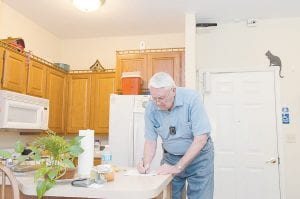 Bob Harrison writes in his TigerPlace apartment in Columbia, Mo., as different sensors mounted near the ceiling record activity patterns. The sensor technology is unobtrusive and does not interfere with his everyday tasks. Researchers at the University of Missouri are studying high-tech monitoring systems that promise new safety nets for seniors living on their own. (AP Photo/University of Missouri)

It could mean no more having to check up on Mom or Dad every morning: Motion sensors on the wall and a monitor under the mattress one day might automatically alert you to early signs of trouble well before an elderly loved one gets sick or suffers a fall.

Research is growing with high-tech gadgets that promise new safety nets for seniors determined to live on their own for as long as possible.

“It’s insurance in case something should happen,” is how Bob Harrison, 85, describes the unobtrusive monitors being tested in his apartment at the TigerPlace retirement community in Columbia, Mo.

Living at home — specialists call it aging in place — is what most people want for their later years. Americans 40 and older are just as worried about losing their independence later in life as they are about losing their memory, according to a recent survey by the Associated Press-NORC Center for Public Affairs Research.

Common-sense interventions like grab bars in bathrooms and taping down rugs to prevent tripping can make homes safer as seniors deal with chronic illnesses. Technology is the next frontier, and a far cry from those emergency-call buttons seniors sometimes wear to summon help.

Already, some companies are offering monitoring packages that place motion sensors on the front door, a favorite chair, even the refrigerator, and then send an alert to a family member if there’s too little activity over a certain period of time. Other gadgets can make pill bottles buzz when it’s time for a dose and text a caregiver if it’s not taken, or promise to switch off a stove burner that’s left on too long.

Researchers at the University of Missouri aim to go further: Their experiments show that certain automatic monitoring can spot changes — such as restlessness in bed or a drop in daytime activity — that occur 10 days to two weeks before a fall or a trip to the doctor or hospital.

“We were blown away that we could actually detect this,” said nursing professor Marilyn Rantz, an agingin place specialist who is leading the research. She compares it to “a vital sign of my physical function.”

Why would the gadgets work? That monitor under the mattress can measure pulse and respiratory patterns to see if heart failure is worsening before someone realizes he or she is becoming short of breath. More nighttime bathroom trips can indicate a brewing urinary tract infection.

A change in gait, such as starting to take shorter or slower steps, can signal increased risk for a fall. Basic motion sensors can’t detect that. So Rantz’s team adapted the Microsoft Kinect 3-D camera, developed for video games, to measure subtle changes in walking. (Yes, it can distinguish visitors.)

The researchers installed the sensor package in apartments at the university-affiliated TigerPlace community and in a Cedar Falls, Iowa, senior complex. On-site nurses received automatic emails about significant changes in residents’ activity. One study found that after a year, residents who agreed to be monitored were functioning better than an unmonitored control group, presumably because nurses intervened sooner at signs of trouble, Rantz said.

The bigger question is whether simply alerting a loved one, not a nurse, might also help. Now, with a new grant from the National Institutes of Health, Rantz will begin expanding the research to see how this monitoring works in different senior housing — and this time, participants can decide if they’d like a family member or friend to get those alerts, in addition to a nurse.

Rantz says embedding sensors in the home is important because too many older adults forget or don’t want to wear those older emergency-call buttons — including Rantz’s own mother, who lay helpless on her floor for eight hours after tripping and badly breaking a shoulder. Rantz said her mother never fully recovered, and six months later died.

“When we started this team, I said we are not going to make anybody wear anything or push any buttons, because my mother refused and I don’t think she’s any different than a lot of other people in this world,” Rantz said.

Monitoring raises important privacy questions, about just what is tracked and who has access to it, cautioned Jeff Makowka of AARP.

To work, the high-tech approach has to be “less about, ‘We’re watching you, Grandma,’ but ‘Hey, Grandma, how come you didn’t make coffee this morning?’” he said.

Sensor prices are another hurdle, although Makowka said they’re dropping. Various kinds already on the market can run from about $70 to several hundred, plus monthly service plans.