Monk UK’s ‘most explosive’ player ever? 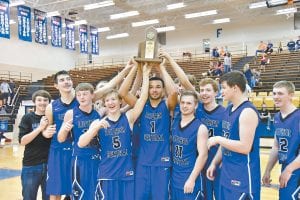 The 53rd District Champion Letcher Central Cougars hoisted their trophy into the air after Friday’s win. (Photo by Chris Anderson)

Playing at Kentucky is the dream for many high school basketball players. Recently even Hillcrest Prep (Arizona) sophomore Josh Green, who only came to the United States two years ago from Australia, said he had that same thought growing up.

However, playing at Kentucky can be as overwhelming at times as it is rewarding. Every game is on television and Kentucky fans are so passionate that they analyze — or maybe over analyze — everything about the team.

Kentucky senior Derek Willis actually grew up a Louisville fan. He once was verbally committed to Purdue before changing his mind and coming to Kentucky to play for John Calipari. He played his final home game Tuesday and now hopes UK can get on another March Madness roll.

His girlfriend, Keely Potts, has seen the impact that playing at Kentucky has had on Willis. She’s watched him get to play on two Final Four teams, hit key shots and become a favorite of many UK fans because of his home-state roots.

But she’s also seen the toll the criticism/pressure has taken on Willis at times.

“I feel like one the hardest things about playing at Kentucky for Derek is the entire process of it all. But that I mean what it took to get him to where he is now,” she said. “One of things I value most about my boyfriend is his patience. He is one of the most patient people I know.”

She noted his first two seasons at Kentucky when he spent a majority of his time on the bench and may even have wondered if UK coaches could foresee a bigger role for him.

“Most players would’ve transferred, and there were a few people who tried to encourage him to do so. Did he get discouraged? Yes. Did he give up? No,” she said. “He didn’t let little to no playing time stop him, or people’s negativity and doubt, get the best of him.

“His persistence and his love/ passion for this sport pushed him to keep at it. He kept working, and he kept going, and to me that’s a hard situation in itself, and he handled it with grace.”

Being in the fan and media spotlight is more difficult to handle than most realize. Potts said anything Willis or teammates did or said was always watched and scrutinized.

“They are held to such a high expectation by the university and the Big Blue Nation. Little kids, and even adults, start to idolize them,” Potts said. “He didn’t change as a person when he signed to play basketball at Kentucky. He didn’t let the hype of UK basketball stop him from being who he was as a person.

“He wasn’t raised in the spotlight, and he wasn’t given any special treatment growing up. So I think coming here and everyone treating him as a celebrity was hard for him to get used to because then and even now, to him he’s just a normal guy. He’s just Derek Willis from Louisville, who got a once in a lifetime opportunity to play for a great school, a historic program, and an amazing coach.

“So the adjustment of it all, I feel was hard for him.”

. Has Kentucky had a more explosive scorer than Malik Monk? The freshman guard had 27 second half points in a 47-point performance against North Carolina. Last week he had 30 second-half points after scoring only three in the first half in a win over Florida.

He’s the first UK freshman to have four 30-point games and has been in double figures every game this season. He also continues to lead the SEC in scoring, something only three other freshmen — Chris Jackson (LSU) in 1989, Bernard King (Tennessee) in 1975 and Jim Nolan (Georgia Tech) in 1946 — have done.

I talked with former Cats’ Pause publisher Oscar Combs about Monk after his stunning performance against Florida. I started covering UK basketball in 1975 and Combs was doing so before me.

“Jodie Meeks could really score, but he had to have just a little bit more room to get his shot off,” Combs said. “Monk is the most explosive scorer I’ve seen.”

Kentucky certainly has had a lot of great players, but we could not find one that we thought was more explosive.

“No wonder when I got on him about a couple bad shots he looked at me like I was crazy. I didn’t know he had 30 in a half,” Kentucky coach John Calipari said after the game.

Get this? Monk didn’t think he was that hot the second half.

“It was just normal. Actually, I was hotter against North Carolina. I didn’t think that much about it,” Monk said.

Even though he decided to transfer to California, sit out a season and then use his final year of eligibility, Marcus Lee still stays in contact with former UK teammates and friends.

He was not unhappy at Kentucky when he decided to make a change and go back to his home state.

“I get to see my family every week now,” he said. “I just decided to take a step back and do the student at school things and take a year to prepare for my final year of college basketball. I am really enjoying it here and the lifestyle it provides me.”

He insists his game has improved dramatically already.

“You would see a huge difference in how I play,” Lee said. “I don’t really want to say anything yet. I want it to be a big surprise. I want people to see the difference as I play. I just have more confidence in everything I am doing. I just wanted a year to do this to where I would be able to do these things I can do now confidently.”

“I don’t let it enter my head, but I do see that,” Lee said. “Things happen for a reason. It is working out for me. You have to go and learn and not look at the past. I made my decision and it’s working out great.”

Postseason basketball play starts next week with the Southeastern Conference Tournament in Nashville.

Kentucky opens play on Friday, but I will be providing special coverage on the tournament and other UK basketball-related items March 6-10 on various radio stations across the state.

If you happen to get a chance to listen (including online), let me know what you think or suggestions for what type of information you might like to hear.

I’ll also be on air from Nashville Sunday morning with WLAP-AM (630) and hopefully explaining to Mark Buerger what Kentucky did to get to the championship game.

Remember you can always reach me via email at larryvau@gmail.com or on Twitter at @vaughtsviews.

Kudos to Kentucky coach Matthew Mitchell and the UK women for their successful season. Considering the turmoil the team had after last season ended and the lack of depth this season, finishing regularseason play 20-9 overall and 11-5 in SEC play is remarkable.

Kentucky got the No. 4 seed and a double bye in this week’s SEC Tournament in Greenville, S.C. Kentucky will play Friday about 2 p.m. EST in the quarterfinals and the most likely opponent will be No. 5 seed Tennessee, which beat UK 72-65 in Knoxville this year. Tennessee must beat the Alabama-Vanderbilt winner to advance to Friday’s game with UK.

Kentucky got a huge boost for its NCAA resume with a win over then No. 3 Mississippi State on Senior Night when former Marion County standout Makayla Epps put in the game-winning follow shot in overtime.

“She’s a team player. A lot of people think she might be selfish but she does what she needs to do to help us win,” sophomore teammate Maci Morris said. “She’s all the time being less involved and she actually gets pretty mad when we don’t take shots because she wants the assist.

Linebacker Eli Brown quickly found out when he got to Kentucky that he was not as physically ready for SEC football as he thought after a brilliant prep career at Warren East High School in Bowling Green.

He redshirted in 2015 and then last season played in games while making 24 tackles. Now with spring football practice getting close to starting, Brown is hoping to find a way to make an even bigger impact this year.

“I matured a lot and coach (Jeff ) House taught me a lot about football in general and playing inside linebacker. I thought I knew everything about football but he took to me another level and I thank coach House for that,” Brown said. “He helped me with schemes. You have to know the schemes for everything. Football is a simple thing if you know the sport and how people line up and how to get to the ball quicker.

“I have been healthy for the first time in a while after coming here with a bad knee. But I feel 100 percent now and have not had any new injuries.”

Brown concentrated on gaining weight during the offseason. He says his technique is fine for the linebacker spot, but he can’t play at 205 pounds like he tried to do last year.

“I just have to put the weight on to play in the SEC. You can’t play underweight,” Brown said. “ In practice and games you go so hard and fast it is hard for me to gain weight. Me and Jordan Jones both want to get to the ball and it is hard for both of us to keep on weight. We push and go full speed even in practice. That is our downfall when it comes to the weight gain.

“But there is a big advantage to speed. We have speed you don’t see that often at the position we play.”