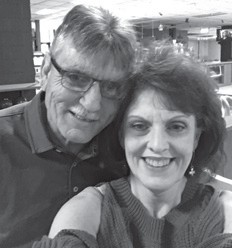 Ronnie and Stephanie Meade Collins. His birthday was the 6th.

If you were to ask anyone what exactly makes a person a legend, I’m sure the man Monroe Brock Sr. wouldn’t fit the description at all.

And yet, if you were to talk with the people from Letcher County that knew him or just saw him walking by the road with his smile and a wave, they would tell you Monroe was a legend in our county.

There are so many people that would pick him up and give him a ride that had no idea who he was. He was a very humble and Godly man. So many have written about either picking him up or just seeing him somewhere talking about God and what God meant to him. My cousin’s daughter, Kaci Lucas, was one post on Facebook I wanted to share with you all. This is what she said:

“I picked up Monroe one time with someone, I can’t even remember who, but he got in the bed of the truck. When the person I was with said there is plenty room in here he said, ‘I don’t want to make the young lady uncomfortable.’ So me being me, I climbed in the back with him, and we talked about God the whole trip. He was such a kind soul, who loved God.” 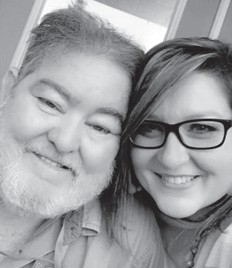 Stevie Meade and his daughter Monica Meade Morton. His birthday was on the 5th.

Kristi Dixon had this to say about him and gave me permission to quote her:

“I don’t remember the first time I met or saw Monroe Brock. I would see him thumbing for rides beside Route 7 and Highway 15, but I was scared of him. I’d been taught that hitchhikers could be dangerous.

“After a while though, I noticed Monroe didn’t act dangerous at all. When someone passed him on the road and didn’t pick him up, he would just smile, wave, and keep on walking.

“Then I found out that Dad had picked him up a few times and had good discussions with him about God, so I became less fearful of him and started speaking to him when I’d see him at BP or some of his other hangout spots.

“ I loved giving him things. I felt like he needed food, but when I gave him anything I’m pretty sure that I came away with a bigger blessing than he did. He once called me an angel just because I gave him a treat bag from church. I knew full well I wasn’t an angel, but I have sometimes wondered if he might’ve been. He made me think of the verse in the Bible that says, ‘When we entertain strangers, we might be entertaining strangers unaware.’ 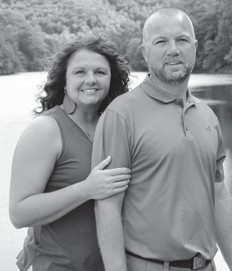 Jason and Marsha Holcomb. He had a birthday on the 3rd.

“If Monroe has taught me something, I would have to say it is, we should never judge anyone who has little to nothing, as one day we too may find ourselves having nothing at all. We should never look down on anyone and always respect one another no matter what their material wealth is.”

I noticed there is a Go- Fundme page for Monroe and if you aren’t computer savvy, I’m sure you could just stop in at Everidge Funeral Home and make a donation. Remember his three children, Monroe Brock Jr., Kimberly Brock, and Alex Brock.

Lots of other prayer requests that are still urgent are; Justin Honeycutt who had a liver transplant and his body is now rejecting it. Zach Pease who has a cyst on his brain, and Joseph Webb. These three young men all need God to heal them. A sister in our church, Brenda Cupps, is in terrible pain with stomach cancer and will begin chemo this week. Remember Jerri Shepherd’s family. She had been battling COVID for the last month or so and passed away February 4. 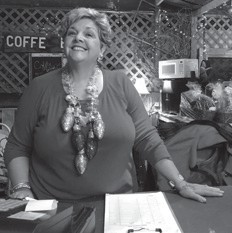 Sue Webb celebrated her birthday on the 3rd.

Remember the Breeding family from Isom also, Edward Lee Breeding passed away on the 7th. Also, a member of the Letcher County Senior Citizens, Ted Adams, had open heart surgery last week and is now home. Pray that he recovers nicely and can get back to walking at the rec center. Remember all those that are grieving, especially our pastor, Bill Jones, and his family.

There were lots of birthdays mentioned. Just a few were Sue Webb on the 3rd. Jason Holcomb on the 3rd. My nephew Little Ken Holbrook, Stevie Meade, Carlie Adams Whitaker, and Cathy Nelson Oakley, all on the 5th. Debbie Baker, Ronnie Collins, and Libby Day Smith on the 6th. Brett Lewis, Brycen Begley, Melody Baker, Judy Craft and Hannah Caudill on the 7th. Luke Holbrook and Missy Potter both on the 8th. Jean Howard Adkins on the 9th, and a brother from church, Tim Caudill, on the 10th. 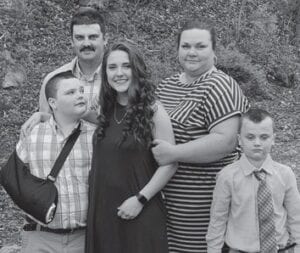 Ken and Marlena Adams Holbrook with Luke, Lauren, and Lane. Luke, on the left, had a birthday on the 8th.

Last week I had intended to write about Cassie McCool-Solis’s books being placed in The General Store at Creek Crossing in Partridge. My post somehow got misplaced and so instead I’ll tell you this week. This is the first time they are for sell in a retail location. Go visit the Scott family at The General Store at Creek Crossing and pick one of these up for a child you love! She said she has signed each copy with a little love note and has prayed for every hand that will hold them! I have both of these books and they are wonderful.

Hope everybody is doing their best to stay safe from this virus and social distancing in your church services. I can’t wait ‘til we can shake our brothers’ and sisters’ hands again and hug the daylights out of some.