Montgomery Gentry will be first act to play in new arena 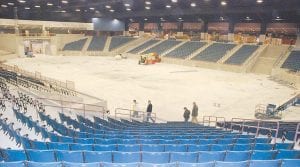 The new exposition center and arena in Corbin is scheduled to open in March. (AP Photo/Times-Tribune)

“Some people had a vision, and it all came together,” said Cliff Clinger, the center’s manager.

When Clinger spoke to the Chamber of Commerce last week, around 8,600 tickets had been sold for four events at the 5,000-seat arena, The Corbin Times-Tribune reported.

The first event is set for March March 12 — a country music concert by Montgomery Gentry. The Harlem Globetrotters will perform at the arena on April 19, followed by comedian Larry the Cable Guy on April 24.

“Some of the calls we are getting are coming from Lexington, Knoxville and Louisville. People are coming in and they want to know where the building is and how to get there, how to access it…” Clinger said.

Managers are preparing for a March 10 open house and ribbon cutting, which Clinger said state and local dignitaries will attend.

“So get ready, the customers are coming,” Clinger told chamber members.

Clinger said the finishing touches include blacktopping the road to the 132,000-square-foot arena and clearing the construction site.

“I can guarantee if you drive by the Tech Center here late at night, you are going to see some lights on,” Clinger said. “Because we are working literally into the night and into the morning to get this project launched.”

The facility has four full-time staff members and will be hiring two more soon.

Clinger said SMG, the management firm hired to run the arena, is seeking an alcohol license.

Clinger said it was too early to tell whether that will disqualify the Corbin facility.

“This is a true sports arena, this is a true convention center, which does fall into some different rules and regulations,” Clinger said.