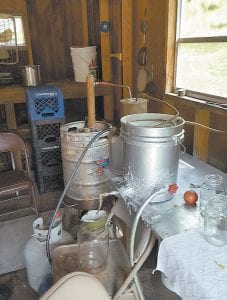 State and local law enforcement officials seized this moonshine still at Kona after an investigation.

Three controlled buys were made from Patrick Collier with the last buy on April 27, an ABC news release said. The next day a search warrant was executed which resulted in the seizure of an operational moonshine still, 27 quarts of moonshine and other materials such as yeast and drums of mash. Numerous documents with recipes and sales information were also confiscated.