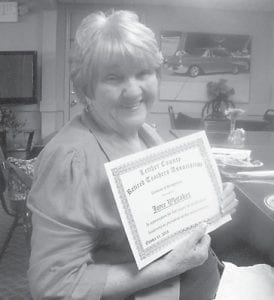 The Letcher County Retired Teachers Association presented Joyce Whitaker with a certificate of appreciation in honor of her 18 years as a leader of the organization.

Cooler temperatures have sneaked in here and there the last few weeks. We’ve had quite an eventful summer as well.

I apologize for so much spacing between my columns this time around. I have been terribly busy with working on the weekend and miss getting news in. I will do better, hopefully, as I schedule my writing time into my afterhours.

Town was abuzz this past weekend with the Arts and Crafts Festival on the grounds of St. Joseph’s Cathedral and front lawn of city hall. Several booths were set up and temperatures were either in the upper 70s or low 80s, so the weather cooperated well.

Then Saturday evening, the Moose Family Center, also known as the Moose Lodge, held its 20th anniversary and invited members to participate in a cookoff. Everyone who wanted to could enter a dish into the category of meats, desserts or side dish and then a winner was picked in each one and the winners won $25. Everyone could pay $5 for all you can eat after the judging. 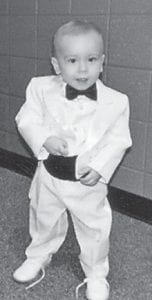 Carson Malachi Stidham was the winner of the Mountain Heritage Festival Baby Pageant in the 13-18 months category. He is the son of Brandon and Stephanie Stidham of Whitesburg, and has a brother, Caleb, 12, and a sister, Chloe, 10. He is the grandson of Lewis and Bonita Collier of Millstone, and Harrison and Wanda Stidham of Dry Fork.

Howie grilled his potato dish that he makes most often to enter. I’m not sure who won, but I do know two of the winners were the baconwrapped chicken strips and the dessert with pecans and cherries. Needless to say, I wasn’t judging.

That wouldn’t have been fair as I had a cabbage and bacon wrapped in foil dish that had been grilled on the charcoal grill.

There wasn’t much left to bring home and everyone had a good time. We left before the karaoke began and the larger crowd arrived for the 50/50 jackpot drawing.

Two or three weeks ago was the Kentucky Bourbon Festival. Many great bands played on the ‘music on the lawn’ at City Hall, but it was Monday through Wednesday night and having the kids home on school nights we didn’t attend. We were disappointed about that.

The Kentucky Headhunters played that weekend and traffic was so bad on this area and farther outside on this side of town that we didn’t even try to go to the car show.

We met Dan and Margo Huff and a few others friends at the Moose Lodge and watched television on the patio.

The rain has been quite high this year. Sympson Lake is actually full of water. That is the lake our city water supply comes from. Last summer we had a bit of a drought.

I kept telling Howie that if we have precipitation like this later on in the year, we are going to be in trouble as far as snow.

Recently, Bernard and I came home from errands and Howie pointed to a huge fuzzy black and brown woollyworm on our living room window screen. It had several black bands around it. I guess that little fuzzy white worm I found a couple weeks ago is irrelevant if you’re using woollyworms to predict your snows.

I am just glad to have had milder heat this summer. It has been very pleasant and I think I’ve spent more time outdoors this year than I have in the previous two.

Thomas Nelson High School, our newest high school in the county and in Bardstown, had its haunted corn maze this past Saturday night. Several people went around town and took their kids.

A lot of people enjoy being scared during October, whether it be going to a haunted house or outdoor maze, or if they opt for a night in with a set of scary movies. It’s all for fun.

Football season is in full swing and almost every week you see someone sporting their fan gear weather it be a jersey or a hat.

I love this time of year because it’s cooling off and the bugs and bees are heading somewhere else, and what I’ve always thought of as family holidays are right around the corner with Thanksgiving, Christmas and of course a little further out, Easter.

The kids are headed back to school on Monday the 14th after a two-week break. City schools are year round. First day back was Aug. 1, and every quarter school is out for two weeks. I would’ve loved that as a kid in school, but as a parent who works, it’s not as flexible and fun as it sounds.

Jerrica and several other little girls between 11 and 13 went to the civic center last week and took a six-hour course to become certified baby-sitters. She was very excited and was disappointed to be placed on the waiting list. The lady called her on Friday and she took her class on Wednesday. She is already working on advertising.

Also this week the ECTC students had midterms, both online and on campus classes. So while school was out for the other kids, Bernard was busy working on tests and studying.

Earlier this week my friend Tracy Cole was changing oil in the fast food restaurant she had been working at for a week, and now has third-degree burns down her arms, chest, stomach and legs. Tracy is a former manager of our LJS/A&W where she worked for eight years.

I suppose that is all the news this week. Prayer list this week includes Sgt. Joseph ‘Larry’ Downs (most of you remember him from WHS as Sgt. Downs); Chester Rayburn, of Liberty (formerly Eolia); Clyde Stidham Jr. of Pound; Tate and Inez Hampton of Eolia; Geraldine Burton of Bardstown; Tracy Cole; Candace ‘Kacky’ Tingle; and Gracie Fulkerson.