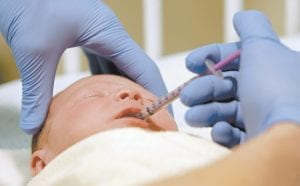 A baby received a dose of morphine in March at East Tennessee Children’s Hospital in Knoxville, Tenn. The baby is one of many infants born dependent on drugs after their mothers abused prescription painkillers or anti-anxiety medicines while pregnant. (AP Photo)

Health officials, health care workers and drug control professionals are talking about the problems surrounding Kentucky babies who are born addicted to drugs.

The Courier-Journal of Louisville reports that hospitalizations for addicted newborns rose from 29 in 2000 to 730 in 2011, a 2,400 percent increase.

At a meeting last week in Frankfort, about 75 experts on the subject said there are encouraging signs despite the numbers.

Those signs include a reduction in the amount of controlled substances dispensed and the promise of getting more pregnant women into substance abuse treatment under federal health reform.

“Everybody’s realizing we want to give kids the best start in life, and this is not the way to do it,” said Dr. Ruth Ann Shepherd, director of the Division of Maternal and Child Health in the Kentucky Department for Public Health.

Financial costs are high. A study in the Journal of the American Medical Association last year said treating just one baby with the syndrome cost about $53,400 in 2009, with Medicaid paying more than three-quarters of these costs.

But David Hopkins, program manager of the Kentucky All Schedule Prescription Electronic Reporting program, or KASPER, said the prescription drug abuse law passed last year by the General Assembly is starting to make a difference, which could reduce the toll in the future.

Hopkins said the numbers of controlled substances dispensed rose steadily every recent year except 2012, when it dropped to 11.17 million from 11.73 million in 2011.

At the same time, he said, the number of KASPER reports requested by doctors, pharmacists, law enforcement officers and others rose to 2,671 in 2012, compared with 811 in 2011. These reports can help spot “doctor shoppers,” or addicts who shop for doctors to prescribe the drugs they crave.

Hopkins told the crowd Monday at Berry Hill Mansion that the U.S. Centers for Disease Control and Prevention has proposed studying the links between infants born withdrawing from drugs and their mothers’ prescription histories in Kentucky. The goal would be to use KASPER and Medicaid records to determine the drug history during pregnancy, and examine if prescribing varies by time periods, such as pre-pregnancy, trimesters during pregnancy, and post-pregnancy.

Jeff Jamar, substance-abuse branch manager for the Kentucky Division of Behavioral Health, pointed to other developments on the horizon. He said federal health reform will open up access to health care, including drug-abuse treatment, for previously uninsured residents through Medicaid expansion and health exchanges.

He said the state also seeks to expand a program called KIDS NOW Plus, which helps those at risk of delivering an addicted baby. The voluntary program now offers educational and preventive services in 66 counties and case management in 39.

Officials said birth outcomes, such as the numbers of premature and low birth-weight babies, are about the same between program participants and the general population of births. They also said 92 percent of women who reported prescription drug abuse at intake had stopped their use by the time they gave birth.

The Kentucky attorney general’s office, meanwhile, is helping lead an effort requesting that the U.S. Food and Drug Administration include “black box” warnings on opioid painkillers letting women and their doctors know the risks of narcotic use during pregnancy. Attorney General Jack Conway, along with 42 of his colleagues, signed a letter recently that offered the possible wording: “Warning: Use of narcotic analgesics in pregnant women may cause Neonatal Abstinence Syndrome.”

“When we were looking at this issue, two numbers really stuck out to us,” said Mitchel Denham of the attorney general’s office. “The instances in Kentucky of Neonatal Abstinence Syndrome have risen 2,500 percent, or thereabout. The other one was the cost …,” which he said his office estimated at $32 million to the state.

What pill-addicted moms do to babies

“Diarrhea so bad that their bottoms will turn red like somebody has dipped them in scalding water and blistered and bled,” said Carla Saunders, a neonatal nurse practitioner who helps coordinate the treatment at the children’s hospital.

They have trouble eating, sleeping and in the worst cases suffer from seizures. Many suffer from skin conditions and tremors. Nurses place mittens on their hands because the babies get so agitated that they constantly scratch and rub their faces.

And they are inconsolable.

A small army of volunteers called “cuddlers” help the East Tennessee Children’s Hospital staff by holding the infants, rocking them and helping them ride out their symptoms.

Many of the babies have private, dark rooms with high-tech rocking machines to keep them calm.

On average, infants stay at the hospital for about four weeks’ time because they have to be watched so closely during withdrawal.