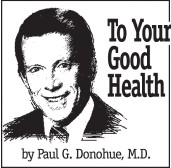 DEAR DR. DONOHUE: My very healthy, active, 6-year-old grandson was just diagnosed as having kidney stones. His pediatrician said it is mostly genetic, but no one else in the family has had kidney stones. A friend told us she heard that stones could be caused by drinking Gatorade. My grandson has drunk a lot of Gatorade. He does not eat processed meat, nor does he have much salt in his diet. From the Internet, I came up with the enclosed article, which linked Gatorade to kidney stones. I feel that someone needs to inform parents that too much Gatorade in children can adversely affect health. — G.S.

ANSWER: An increase in children having kidney stones has been noticed. Some authorities have speculated that the increase in stones might be linked to children’s greater intake of salty foods like potato chips, french fries and other heavily salted snacks. The sodium in salt leads to a rise in the amount of calcium lost in the urine, and, therefore, an increase in kidney-stone production.

Eight ounces of Gatorade has 110 mg of sodium. New guidelines for daily sodium intake is 1,500 mg. To reach that limit by drinking Gatorade, one would have to drink 13 8-ounce cans or 9 12-ounce cans. Blaming the surge in the number of children on Gatorade seems iffy to me.

I welcome other readers’ opinions on this issue.

DEAR DR. DONOHUE: Does it hurt you to exercise if you have a cold? I do it all the time, and I can’t see that it makes anything worse. I’ve been told not to do so. — B.R.

ANSWER: If you’re coughing, sneezing or have a dripping nose, others are not going to appreciate exercising along with you.

A general rule says if your symptoms are above the neck, it’s OK to exercise. Such symptoms would be a stuffy or runny nose, a scratchy throat and an occasional sneeze.

If you have an elevated temperature, achy muscles or a persistent cough, don’t exercise.

DEAR DR. DONOHUE: Since I was a young child, I was told not to use public restrooms because I could catch something. What are the chances of catching a disease from them? — F.N.

ANSWER: Yours is a fear shared by many. If public restrooms were a source of infections, they would be closed. They’re not. As far as sexually transmitted diseases go, I have never seen any information that implicates them in passing such infections to others.