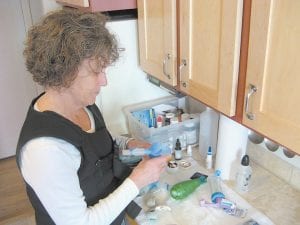 Laura Mentch, 57, of Bozeman, Mont., is shown with her daily treatments for cystic fibrosis, which include inhaled medications and a chest-vibrating vest to clear airway clogs. More CF patients are surviving to middle age and beyond, and Mentch is part of a special subset — people not even diagnosed until later in life. (AP Photo)

Doctors always said allergies and asthma were behind Laura Mentch’s repeated lung and sinus infections. Only when she turned 50 did she discover the real culprit — a disease notorious for destroying children’s lungs.

Mentch is part of the gradual graying of cystic fibrosis: More and more patients are surviving into adulthood, some even to middle age and beyond.

Now, researchers are taking a close look at the first group to make it past age 40 with this incurable genetic disease, as a much-needed guide for patients and doctors on what to expect.

And they’re finding CF is even more complicated than thought. Consider Mentch: The Bozeman, Mont., woman is part of a small but growing subset of patients not diagnosed until adulthood — patients long assumed merely to have a mild version of the disease that, in its classic form, can quickly attack lungs.

Not so, contends Dr. Jerry Nick of National Jewish Health in Denver, home of one of the largest adult CF treatment centers. He studied how more than 3,000 longterm survivors fared, both at his center and using data from patients included in the Cystic Fibrosis Foundation’s national registry over 15 years. He found that once their disease revs up, those diagnosed as adults can deteriorate as quickly as those diagnosed younger.

If so, his findings may have ramifications for babies as well. How? In recent years, every state has begun screening newborns for cystic fibrosis, so that patients can start life-extending treatment before that first infection ever hits. But doctors are having trouble determining if a fraction of those babies really will develop CF or not, because they harbor less common genetic mutations than the classic type linked to early, severe disease.

“We’re struggling with this,” says Dr. Bruce Marshall of the Cystic Fibrosis Foundation, which issued guidelines in December recommending such children be closely monitored for signs of disease as they grow. “At this point, we really don’t know exactly what to do with these folks.”

Those less common mutations are the same ones Nick says he’s seeing in people, like Mentch, whose CF wasn’t diagnosed until adulthood.

“This says you shouldn’t dismiss it” in the babies with those ambiguous test results, Nick cautions. “This is not the classic CF of 30 years ago.”

About 30,000 Americans, and 70,000 people worldwide, are living with cystic fibrosis, caused by inheriting a flawed CF gene from each parent. The disease causes a sticky mucus to build up in the lungs, clogging them and leading to life-threatening infections. It also clogs the pancreas so the body can’t properly digest food.

Only a few decades ago, children with CF seldom survived elementary school. Today, thanks to earlier diagnosis and improved treatments, 47 percent reach 18 or older. Most of the 400 deaths a year are among teenagers and young adults, according to the CF Foundation’s registry.

So far, just over 5 percent of patients in the registry have made it beyond age 40 — although Nick’s study suggests some who seek care outside that network aren’t counted — and babies diagnosed today are expected to live into their 50s.

Beyond the adult-diagnosed phenomenon, Nick found patients who’d battled CF since childhood and bear the highest-risk gene type survived, too, showing there’s still lots to learn about factors that play a role. While the adult-diagnosed of course lived the longest, anyone who made it to 40 had a good chance of surviving another decade.

Nick’s main message: Proper care during adulthood fights the lung damage. Yet regardless of when they were diagnosed, Nick found, fewer than half of long-term survivors are treated at the nation’s specially designated CF centers once they pass 40 — while those who do fare better.

Mentch’s lung function greatly improved after the right diagnosis got her the right treatment, ending regular bouts of bronchitis she’d experienced since her teens.

“It’s not OK to have bronchitis twice a year and think it’s normal, but that’s … how I walked through life,” says Mentch, now 57, who was diagnosed only when a doctor tested her sputum and found a type of Pseudomonas bacterium trapped in her lungs, a red flag for CF.

Now Mentch travels to the Denver CF clinic four times a year to stay on top of her care, which includes inhaled medications and a chest-vibrating vest to clear airway clogs. As the disease progresses, she says, “I have a huge responsibility to take care of myself.”