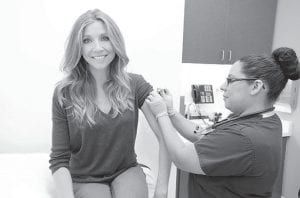 Sarah Chalke, actress and spokesperson for the Faces of Influenza campaign, received her flu shot recently to help protect herself and her young son, Charlie, from this serious disease. Vaccination is recommended for everyone over 6 months. (AP photo)

Time to get your flu vaccine — and a surprising new report shows babies and toddlers seem to be getting protected better than the rest of us.

Last year’s flu shot won’t shield you this year: Two new strains of influenza have begun circling the globe, and the updated vaccine appears to work well against them, government officials say.

Just because last year was the mildest flu season on record doesn’t mean the virus might not bounce back to its usual ferocity this winter.

A yearly vaccination now is recommended for nearly everybody, but new figures show that last year 52 percent of children and just 39 percent of adults were immunized.

Best protected: Threequarters of tots ages 6 months to 23 months were vaccinated. That’s a signifi- cant jump from the previous year, when 68 percent of those youngsters were immunized.

But even though seniors are at especially high risk of severe illness or death if they catch the flu, just 66 percent of them were immunized, a number that has been slowly dropping for several years.

Older adults got a little lost in the recent public health push to explain that flu vaccine benefits all ages — and it’s time to target them again, said Dr. Daniel Jernigan, a flu specialist with the Centers for Disease Control and Prevention.

In contrast, child deaths from flu have made headlines in recent years — the U.S. counted 34 pediatric deaths last year — raising parents’ awareness of the risk, he said.

The only ones who shouldn’t get vaccinated: babies younger than 6 months and people with severe allergies to the eggs used to make the vaccine.

Flu specialists can’t say how bad this winter’s flu season might be. Influenza strains constantly evolve, and some cause more illness than others.

But strains from the H3N2 family tend to be harsher than some other flu types, and a new H3N2 strain is included in this year’s vaccine because it is circulating in parts of the world.

Because of that strain, “I am pretty confident that this year will be a more traditional flu season” than last year, CDC’s Jernigan told The Associated Press. “People won’t have had any real exposure to that.”

— Roughly a third of teenagers got a flu vaccine.

— So did 45 percent of high-risk young and middleaged adults, those who are particularly vulnerable to flu because they also have asthma, diabetes or any of a list of other health conditions.

— About 47 percent of pregnant women were vaccinated. Women have five times the risk of severe illness if they catch the flu when they’re pregnant, and they can require hospitalization and suffer preterm labor as a result. Vaccination not only protects them, but recent research shows it also provides some protection to their newborns as well.

Vaccination rates vary widely among states, too. Nevada vaccinates a third of people who are eligible, while South Dakota reaches 51 percent. In Iowa, 76 percent of seniors get their flu shot, compared to half in Alaska. In Rhode Island, 74 percent of children are vaccinated, compared to 39 percent in Alaska.

Manufacturers are expected to make about 135 million doses of flu vaccine this year, and there are four different forms to choose from:

— The traditional flu shot is for all ages and people with high-risk health conditions.

— FluMist, the squirtup the-nose version, is for healthy people ages 2 to 49 who aren’t pregnant.

— A high-dose shot is available for people 65 and older.

— And the intradermal shot — a skin-deep prick instead of the usual inchlong needle — is available for 18- to 64-year-olds.

The vaccine is covered by insurance, and Medicare and some plans don’t require a copay; drugstore vaccination programs tend to charge about $30.

People can be vaccinated anytime, but Jernigan cautioned that it takes about two weeks for protection to kick in. Flu typically starts to appear in October or November, and peaks in January or February.

Also this year, public health groups are urging workers in doctors’ offices, hospitals and particularly nursing homes, where patients are especially vulnerable, to do a better job getting vaccinated.

About 67 percent of health care workers were vaccinated last year, a number that’s slowly rising. Doctors are the best role models, with about 86 percent immunized. But anyone — from the receptionist to the person delivering meals — can spread influenza to patients, and just half of those workers in nursing homes got vaccinated last year, Koh said.

In addition to patient safety, hospitals and clinics need to have enough healthy staff to care for the sick once the flu strikes, said Dr. William Schaffner of Vanderbilt University.

When that happens, “we need to be vertical, not horizontal,” he said.