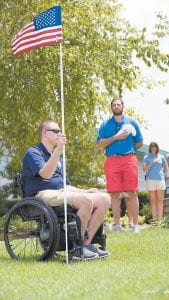 Offense is about execution. If you are not disciplined and do all the little things right, that is going to separate us. You can’t be in games with great teams in our league if you turn the ball over, have false starts, have holding penalties, if don’t execute on third down, if you don’t make plays on third down. You are not going to win if you do those things. That’s what we are really making sure we hone in on about being a more disciplined offense. That is anywhere. I am sure that is what (former offensive coordinator) Shannon (Dawson) was preaching last year. You have to be disciplined. That’s the message. You can’t wish it, think it and hope it. You have to get it done every day. That is when you win. We have the ability.”

Kentucky assistant coach John Robic is not one to get overly excited praising players, especially those who have yet to play a game for the Wildcats. That’s why hearing how Robic praised UK’s freshman class last week was so impressive.

“We’ve gotten to know them through the recruiting process, and it’s great that they’re all here. They’re a great group of young men that are really, really talented,” Robic said. “Very, very athletic. We have really good size with this group that is in here right now. You can really tell a difference in the size of our team with the addition of this freshman class.

“What it’s done is it’s made the workouts and the practices much more competitive, especially near the rim. I think it’s going to help us become, again, another staple of what we have is a really, really good defensive team because of how long we are and that we’ll be able to challenge a lot more things at the rim. You have good speed, really good skill, and it’s a fine group to watch so far.”

That group is considered the No. 1 recruiting class in the country with five five-star prospects. De’Aaron Fox and Malik Monk are 6-3, Bam Adebayo and Wenyen Gabriel are 6-9 and Sacha Killeya- Jones is 6-10.

“I think they’re getting acclimated with how Coach wants to play and how we like to play. I think the speed of the game is different. They’re all playing well right now. They’ve only been here — this is just their third week coming up. Just really working on individual stuff right now and sort of getting into the flow of how we want to play. We mainly do offensive things at this point and time, but the one thing I can tell you without singling anybody out is it’s really competitive and that’s something we’re really encouraged by,” Robic said.

I’ve known Tamme going back to his Little League athletic days in Danville and have taken great pride in following his athletics career. It’s also why it is so easy to tell how proud he is of Swings for Soldiers Classic, a golf scramble fundraiser Tamme and his wife, Allison, put together seven years ago to raise money to build homes for veterans injured serving our country.

“This is our baby and what we created,” said Tamme.

His “baby” will be July 18 at the University Club of Kentucky just outside Lexington. The previous six events have raised over $500,000 to help build specially adapted homes for severely wounded veterans and their families .

The Swings for Soldiers Classic has grown far more than the Tammes ever imagined when they started.

“We made it happen that first year and we did everything from making every phone call to printing cart signs on our computer at home,” Tamme said. “We were out there at 5 in the morning putting out hold signs and the day lasted until 11 p.m. It was a long day, but awesome day. Still, I wasn’t sure we could ever do this again.”

That changed before he left the golf course. He was walking out with his wife along with Chase Matthews, a wounded veteran with two prosthetic legs, and his wife.

“I am thinking this went great but I am mentally and physically exhausted. I just did not know if we could ever do this again. We had our own family,” Tamme said. “Then Chase looked up from his wheelchair and said, ‘Hey Jacob, next year I am going to play in this things.’ Small words can create a big change.”

Kentucky coach Mark Stoops made it clear he was not a fan of satellite camps earlier this summer.

“People can do whatever the heck they want to do. I’m not going to get involved with third parties and pay people to have camps to recruit one player or two players. I’m not going to do that,” said Stoops. Nothing wrong with that, either. In fact, I agree. But guess what? Recent Kentucky verbal commit Josh Ali, a three-star receiver from Hollywood, Fla., got the attention of Stoops at a satellite camp in Florida. He committed to UK even though he’s never been to Lexington (he plans a visit later this month).