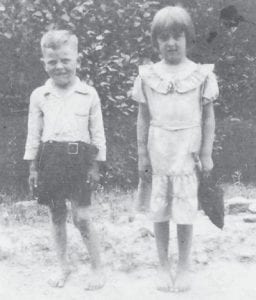 Bonnie Ingram and her brother, Jack Dempsey Cornett, children of Victor and Mary Lea Campbell Cornett, attended the baptism of Calvin Foutch in the Doubles of Pine Mountain.

My aunt well, my greataunt, was my dad’s real aunt, Katie Johnson, sister to my Grandma Rachel Cornett.

I was seven years old and my brother Jack Dempsey was five and Dad and Aunt Katie heard somehow that dad’s uncle, Calvin Foutch, who was married to dad’s aunt Lucy on his dad, D.D. Dock Cornett’s, side, was going to baptized. Uncle Calvin, who had been real sick for some time, wanted to be baptized before died. He was very old in the 1930s.

He and Aunt Lucy lived in the Doubles of the Pine Mountain, which was made into the Little Shepherd Trail in later years.

Most of the road through the mountain was graded by my dad’s first cousin and Lucy’s nephew, Evan Cornett. He really had a scary job.

I had never been to a baptism before and didn’t really know what that meant, but I wanted to go see (very curious).

We left home early one morning and went up to the road that everyone took to go to the Doubles. People crossed the Pine Mountain that way when they had to walk. It was a rough way to go, but we wanted to go.

It was near the Letcher County line up Cumberland River. Aunt Katie lived up in a branch called Coldiron Branch. She met us there and we took off to the road up the mountain.

I had a new dress made out of light green taffeta and new shoes, and my brother had new clothes also. We had to dress up to go places like church or for deaths, and also to a baptism. Dad had also bought me a little umbrella to carry in the hot sun or the rain. I was very proud of all that.

It took us almost half the day to get to their home. We got there and they had made a dam in a little cover where a small branch of water ran down close to their home. The water got deep enough to do the baptism in.

I remember sitting on the porch of their house, resting while they got him ready to take to the pond. Everyone went ahead of the ones who were bringing him down the hill.

I remember some men came, carrying him in an old, homemade chair he had made before he got sick. He had on a white outfit and a white cloth around his head. He was beautiful to me, but too weak to walk by himself.

I was too young to understand all the goings-on with the preachers and the ones crying, and being so heartbroken and so happy for him.

They got him and led him into the water and they said words I didn’t know, then they immersed his whole body in the water, and back out, and everyone was happy-acting for him.

He was happy too, raising his arms to heaven. Then, everyone went back to the house and I guess they had food for everyone. I don’t remember about that part.

Then we all left and came back down the trail to home.

My new shoes were skinning my feet and so were Jack’s. We pulled them off and walked the rest of the way home without shoes.

Some person was with us and had a Brownie camera and made a picture of the baptism and the people, and one of my brother and myself.

We were sure glad to get off that big mountain. Dad had an old-time car he had driven to the place Aunt Katie met us. He had to leave it there. We were happy to get in it and get home to Mom, Mary, and my two little brothers, Emory and Arlie Elmon.

Mom was glad for us to get home. We lived at Blair at that time.

It wasn’t too long after that we got word that Uncle Calvin had died.

Dad went back again to the funeral, but we didn’t go with him that time. It was too far and hard on us.

Uncle Calvin was a chairmaker most of his adult life. Everyone bought chairs from him for their table and rocking chairs for the living room. They were good ones, too.

In those days, times were hard and he did that to make a living. They raised almost all their food and had cows and hogs and chickens, and some wild animal meat to eat.

He and Aunt Lucy raised a big family, and they learned to make chairs also, the boys, anyway. The girls married and left at young ages.

The biggest part of them are buried up there, close to where they lived. It is a pretty little cemetery, up where the wild animals roam and beautiful birds fly and sing their songs. God and Jesus only hear. It is so still.

One of Uncle Calvin’s grandsons made a beautiful chair, and you can visit the Appalshop at Whitesburg and see it. It has six legs and is carved with a lot of words by the artist.

I believe his name is Chester Cornett. He wore overalls and went barefoot most of the time. He roamed around the surrounding counties doing his artistry to show people how he did his job. He had a beard and long, gray hair.

I’m very proud of them being my ancestors. God bless all forever.