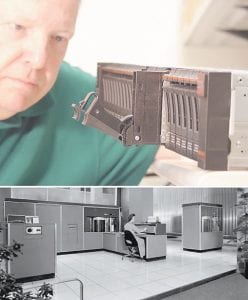 The world’s first computer storage system, the IBM “RAMAC,” (bottom photo) — took up an entire room and could store 20 megabytes of data in 1956, roughly the equivalent of one song stored on an MP3 player. IBM’s newest storage system announced today, the Storwize V7000 (top photo), can hold more than one million times more data than the RAMAC in a package that fits on a desktop. Social-networking sites, digital photography/video, and on-line commerce are among the activities causing huge increases in the amount of data that need to be filed, sifted and managed by businesses today. IBM storage inventions can allow businesses to categorize information in new ways, allowing for electronic medical records, for example, to be delivered to patients in minutes rather than days. (Feature Photo Service for IBM)