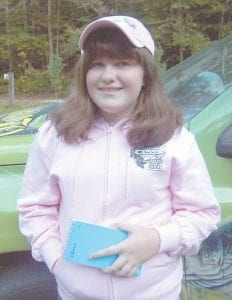 About the author Katherine “ Katie” Braswell has returned to classes at Letcher Elementary School after being given permission to travel with her father, professional fisherman Bill Braswell, to cover the Bass Pro Shop’s Crappie Masters Classic National Championship tournament Millbrook, Alabama.

More than 300 anglers descended upon the city of Millbrook, Alabama during the week of September 28 through October 2 for the Bass Pro Shops Crappie Masters Classic National Championship Tournament. The tournament fishing waters included the Alabama River and Lake Jordan.

Tournament week began on Wednesday with a welcome banquet that included yearly awards presentations. Angler Team of the Year for 2011 was the highlight of this sports banquet. The winners were my father Bill Braswell of Viper in Perry County and his partner Dan Dannenmueller of Millbrook, Ala., with 2,621 points total. Sportsman of the Year was also a top honor to have obtained. This award went to Ned Rutledge of Warsaw, Missouri, who was unable to attend the classic because of illness. Country singer Brianne Lawler Dean provided the entertainment at the banquet.

Thursday began with the sponsor/media tournament. Only one big fish was allowed per team. I was allowed to fish with my father (Bill Braswell) and Dennis Willet of the “Gettin’ Outdoors” radio show. It was a very fun experience, even though we didn’t do as well as the other contestants. The winner of the media tournament was Steve Putnam and his partner Dole Henson with a fish that weighed a total of 1.85 lbs.

Thursday evening we attended the shrimp broil dinner hosted by the city of Millbrook. Mayor of Millbrook Al Kelly said, “This tournament helps benefit my city because it makes people want to come to Millbrook. While they are here they will spend money on things like gas. They also pay taxes that go towards our city. We also very much enjoy having the tournament here.”

During the day I interviewed several different teams including Phil and Eva Rambo of Bloomington, Indiana and Don and Toni Collins of Clearwater Beach, Florida. Both teams described the Classic as being like the Super Bowl, the ultimate challenge.

Friday was the first day of the Classic. The anglers were in line for the weigh-in at 4:30 p.m., with anglers Billy and Scott Williams in the lead. The remaining part of the day was used so that the anglers could rest for the final day of the classic.

Saturday was the final day of the Classic with the anglers on the water from 7 a.m. to 2 p.m. This was a big day for the anglers, considering that this was their final chance to win the 2011 Crappie Masters Classic. The prizes for the top 10 ranged from $1,000 to two new Nitro Z-7 boats. There were some really close weights brought in on Saturday, but the biggest weight was brought in by 2011 Crappie Master Classic Champions Bill and Roger Gant of Pickwick Lake with a total weight of 21.48 lbs. That’s pretty close compared to the second place winners David Stancil and Earl Brink, with a total weight of 21.17 lbs. And right behind them in third place was Rodney Neuhaus and Kyle Schoenherr with a total weight of 20.98 lbs.

I later interviewed Bill and Roger Gant who have been fishing the Crappie Masters Tournament Trail since 1968. When they were fishing the Classic they were using the side-trolling technique, they made their own jigs, designed their own poles, and fished in deep water.

After the weigh-in the Crappie Masters Awards Banquet was held. More than $ 170,000 worth of cash and prizes with trophies were given away at the banquet. Entertainment was provided by Stevie Ray Anderson of the band Dr. Hook and the Medicine Show. This concludes the tournament season for the pro-anglers until next year.

Sunday morning was the final day of Classic activities with the Crappie Masters Junior Championchip. Eight kids from two different age groups were selected to compete. These kids were selected from the Kids Fishing Rodeos all throughout the year. The winner of the 10-12 age group was Isaih Hurvey from Arkansas, who won a $4,000 scholarship. The winner of the 13-15 age group was Olivia Naifeh from Tennessee, who weighed in the top weight of 6.39 lbs. She also won a $4,000 scholarship.

Katie Braswell, 11, requested a short leave from her classes in 6th grade at Letcher Elementary School to attend Crappie Masters tournament where her father would be competing and was given the classroom assignment to cover the activities as a sports reporter. Crappie Masters President Paul Alpers approved the assignment and gave her all privileges normally given to the sports media covering the tournament events. In addition to The Mountain Eagle, Katie is also writing about the tournament for Crappie Masters Magazine, Coastal Angler Magazine and the online magazine Crappie Now.