More than 500 line up to meet UK’s Harrellson 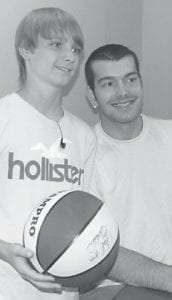 Austin Boggs, 14, of Kingscreek, posed for a photo with Josh Harrellson. Austin is the son of Bill and Judy Boggs.

The two-hour meet-and-greet session in Whitesburg is apart of Harrellson’s Jorts Tour, which is sponsored by Wendy’s, Whitaker Bank, Jack Kain Ford, Coal Mining Our Future.Net and Martin’s Peterbilt.

Wendy’s management handed each person a coupon for a $1 off a future visit and wrote a number on the back of each coupon.

The first fan in line, Zack Cornett, 8, of Linefork, arrived at Wendy’s at 3: 15 p. m. with his mother, Delisa Cornett. The Cornetts ate dinner and Zack finished his homework while they waited to meet the 6-foot-10-inch senior from St. Charles, Mo.

After 215 coupons were handed out, the management locked the door.

“We hit a point to where we could not let anymore people in the store,” said Scott Helle, general manager of the Whitesburg Wendy’s. 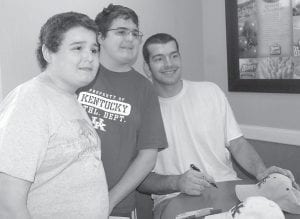 Pictured with Josh Harrellson are 11-year-old twins Robert and Stamper Collins of Neon. They are the sons of James D. and Linda Collins.

As people left the restaurant, more people were let inside.

“I would guarantee more than 500 came through,” said Helle.

As it got close to 8 p.m., Wendy’s management told people in line that probably they wouldn’t get to meet Harrellson.

“We probably could have went for hours if we let them keep coming,” said Helle.

The ballplayer nicknamed “Jorts” because he wears blue jean shorts, entered the restaurant from the kitchen area around 6 p.m. He posed for a few photographs near the counter and then went to the bathroom. Harrellson then sat down at a small table located to the far left corner of the dining area and signed autographs and posed for photos for two solid hours.

“We’re excited that he is a Kentucky player,” said Delisa Cornett. “We want more celebrities to come here.”

Autumn Adams, 15, of Isom, said she wanted to meet Harrellson because he is famous and she is a UK fan. 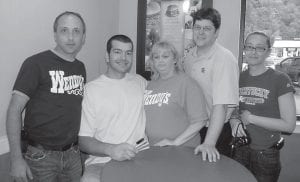 Dylan Nickels, 11, of Thornton, had never met a UK basketball player before and was excited to do so.

“He is my favorite basketball player,” said Nickels. “I like how he is all square and can dunk a bunch of shots.”

Harrellson was in no hurry and took his time meeting each fan. Jeff Sheppard, who played basketball at UK from 1993 to 1998, kept the line organized and kept telling people they could only have one item autographed.

Harrellson would sneak and sign two or three items for fans if they asked.

“We can’t stop signing,” Sheppard said to the crowd. “We have to get as many people in as we can. Step right over there to take a picture.”

And then Harrellson dropped one of his Sharpie markers on his shorts.

“Oh, not on the jorts,” said Harrellson.

He had four different colored Sharpies and would use a certain color depending on what a fan had for him to sign. He knew what looked best with a silver Sharpie instead of a black or blue one.

Harrellson said he has signed so many autographs that he could do it with his eyes closed.

He told Tori Holcomb, 7, of Whitesburg that he loved her. Most little girls he would call “sweetie pie.”

He signed a rubber bracelet for a boy and told him not to touch it or it would smear.

An older man asked Harrellson if any teams from the NBA were looking at him and he replied by saying, “Man, I don’t know.” The man told Harrellson he hoped he got it and he said “me, too.”

A teen-aged boy posed for a photo while wearing a Duke shirt.

“It’s alright,” said Harrellson. “We made it further than them.”

Harrellson drove to Hazard at 3 a.m. Tuesday morning. He and Sheppard played basketball with students at Emmalena, Hindman and Jones Fork elementary schools in Knott County on April 26. He said playing basketball with children is his favorite part of the tour because “he likes to challenge them.”

Harrellson also signed autographs at the Knott County Sportsplex before heading to Whitesburg.

“I just like giving back for all the support they have shown me,” said Harrellson.

He said he gets overwhelmed at times.

“With training on top of this, it gets tiring, but it is worth it,” said Harrellson. “It makes a lot of kids’ lives.”

He went to the Manchester Wendy’s on April 19 and the London Community Center on April 21. Harrellson will be at the Pikeville Wendy’s from 4 until 6 p.m. on May 5. Stops also include the Hazard Wendy’s on May 10 and the Jackson Wendy’s on May 11. A complete list of Jorts Tour dates can be found at www.jorts55.com.

After an hour of signing autographs, Harrellson thought he was almost finished and then someone said look outside.