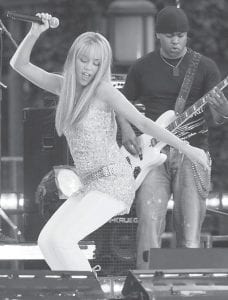 Kentucky fans of “Hannah Montana” who weren’t able to get tickets for the Dec. 12 “Best of Both Worlds Tour” stop in Lexington have been given another chance.

“We were getting a lot of complaints from people irritated that they had stood in line and gotten on the computer to try to get tickets and got shut out by brokers and scalpers,” Assistant Attorney General Todd Leatherman said.

The tickets were to go on sale Tuesday (Nov. 20) through Ticketmaster’s phone line and Internet site only, the attorney general’s office said. Purchasers will be limited to four tickets and must pick them up at Rupp Arena, the site of the show, on Dec. 12 and show photo identification and the credit card used to purchase the tickets.

Additional restrictions were being considered, the attorney general’s office said in a statement.

Tickets to the show went on sale Sept. 15 and sold out in minutes, the statement said.

Miley Cyrus, 14, is the star of the Disney Channel’s “Hannah Montana” TV show and daughter of country singer Billy Ray Cyrus, a native of Flatwoods, Ky.

Meanwhile, thousands of “Hannah Montana” fans who couldn’t get concert tickets could potentially join a lawsuit against the teen performer’s fan club over memberships they claim were supposed to give them priority

for seats. The lawsuit was filed on behalf

of a New Jersey woman and anyone else who joined the Miley Cyrus Fan Club based on its promise that joining would make it easier to get concert tickets from the teen star’s Web site.

he class-action lawsuit names Interactive Media Marketing Inc. and Smiley Miley Inc. as defendants and seeks triple damages for all members of the lawsuit and attorneys’ fees. The plantiff doesn’t yet know the size of the class, but based on the popularity of the Web site, it could number tens of thousands of people, according to the lawsuit.

“They deceptively lured thousands of individuals into purchasing memberships into the Miley Cyrus Fan Club,” plaintiffs’ attorney Rob Peirce said. His Pittsburgh firm and a Memphis firm filed the suit in U.S. District Court in Nashville.

The fan club costs $29.95 a year to join, according to the lawsuit, which alleges that the defendants should have known that the site’s membership vastly exceeded the number of tickets.

The lawsuit was filed on behalf of Kerry Inman, a New Jersey woman who claims that she tried to log into the site to buy tickets to Cyrus’ Atlantic City, N.J., performance at the moment the tickets went on sale and was unsuccessful.

The Web site does not guarantee ticket availability, but represents that members who log on shortly after tickets become available will have a good opportunity to get them, according to the lawsuit.