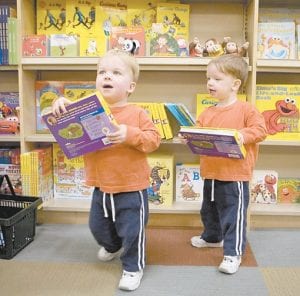 The number of twins born in the United States has soared over the last three decades. (AP Photo)

The number of twins born in the U. S. soared over the last three decades, mostly the result of test-tube babies and women waiting to have children until their 30s, when the chances of twins increase.

“ When people say it seems like you see more twins nowadays, they’re right,” said Joyce Martin, an epidemiologist who coauthored the Centers for Disease Control and Prevention report.

Some increase was expected as more women are delaying starting a family until they are over 30. For some unknown reason, mothers in their 30s are more likely to have twins than younger or older women. As much as a third of the increase can be attributed to that, Martin said.

The rest of the rise is due to fertility drugs and treatments.

“ You have a double whammy going on. There are more older moms and more widespread use of fertility-enhancing therapies,” Martin said.

Starting in the early 1980s, couples who had trouble conceiving began to benefit from medical advances like fertility drugs and in vitro fertilization and other procedures. These treatments became fairly widespread in the 1990s but are expensive, and availability and insurance coverage varies.

In 2009, twin rates increased in all 50 states, though the jumps were highest in lower New England, New Jersey and Hawaii. In Connecticut, twins now account for nearly 5 percent of births.

Over the last three decades, rates rose for white, black and Hispanic women, but the increases were not uniform. Rates doubled for whites, rose by half for blacks and by about a third for Hispanics. Historically, black moms have twins most often, but white moms have almost caught up.

The greatest increase in twin rates was for women 40 and older. They are more likely to use fertility treatments and to have two embryos implanted during in vitro fertilization, whereas younger women are more likely to get just one.

While a lot of attention is focused on the impact of fertility treatments, that’s not the only factor. Before fertility treatments existed, about 2.5 percent of the babies born to women in their late 30s were twins, compared to under 2 percent for younger and older women. Some research has suggested women in that age group are more likely to produce multiple eggs in a cycle, increasing their chances of twins.

Clearly, there are more older moms. In recent years, more than a third of all births have been to women 30 and older, up from just one-fifth in 1980.

Take Victoria Jacobson. At 31, she gave birth to twin girls last April — her first children. With no history of twins in her family, and no fertility drugs, it was a big surprise when she found out at six months pregnant.

“ I cried, because I’m more of a realist. My husband laughed,” said Jacobson, of Glen Ellyn, Ill. “They were not tears of joy. Maybe shock, more than anything.”

Still, Jacobson doesn’t find the new report on twin births surprising. A good friend had twins four months after Jacobson’s girls were born. “I’m stopped at every corner and in every store” by mothers who also have twins, or who know of other twins, she says.

“I never knew how many twins were around until I got twins.”

Are more twins good news? Some experts say the trend is worrisome, noting that multiple births are more dangerous for the mother and their babies. The infants tend to be born earlier, smaller and weaker, and require much more care.

Jacobsons’ twins arrived a month early and were tiny, about 3 pounds each. They had to be cared for in a hospital intensive care unit, and one needed a ventilator at first to help her breathe.

At 8 months, they are still small, but healthy and doing fine. Still, they don’t sleep through the night, and breastfeeding two and getting them on the same schedule hasn’t been easy, she said.

Despite the challenges, she has this advice to other moms of twins: Don’t “think about it as double trouble. It’s still a double blessing.”