More women over 30 seeking treatment for disorders such as anorexia, bulimia 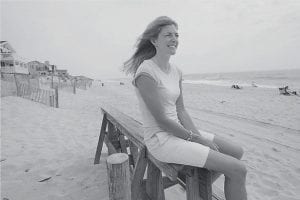 Kelli Smith, 39, sat near the Atlantic Ocean earlier this month in Brant Beach on Long Beach Island, N.J. Smith went into a residential treatment center for anorexia at age 31. Now, she is doing better and is trying to keep herself healthy. (AP Photo/Mel Evans)

Kelli Smith was nervous as she walked into the Philadelphia treatment center, seeking help at last for her anorexia. Looking around at the other patients, she was struck by how young they seemed.

“I just kind of looked around and I thought, ‘Oh, where is someone my age?'” recalls Smith. At age 31, she found herself face-to-face with teenagers and 20-somethings.

Eating disorders such as anorexia and bulimia have long been considered diseases of the young, but experts say in recent years more women have been seeking help in their 30s, 40s, 50s, and older. Some treatment centers are creating special programs for these more mature patients.

Most of the women in this age group who seek treatment have had the problem for years, said Dr. Donald McAlpine, director of an eating disorders clinic at Mayo Clinic in Rochester, Minn. “The epidemiology is pretty clear that anorexia and bulimia both peak in the late teens, early 20s,” yet “a lot of (patients) continue to be symptomatic right on through to middle life.”

People who study eating disorders suggest several reasons there might be more women over 30 seeking treatment for what is typically a young woman’s problem: growing public awareness, social pressure to be thin and an aging group of baby boomers.

National statistics on eating disorders are hard to come by, but data from some treatment centers suggest a steady increase.

In the Minneapolis suburb of St. Louis Park, Park Nicollet Health Services’ Eating Disorders Institute saw 43 patients age 38 in 2003 – about 9 percent of its total patients. For the first six months of this year, the institute has treated nearly 500 patients over 38, about 35 percent of its total.

The Renfrew Center, a network of treatment centers in the eastern U.S., said about 20 percent of the 522 patients treated at its Philadelphia center in 2005 were 30 or older. In 2006, about 13 percent of the 600 patients were in that age group.

“Whatever this is – if it’s an increased awareness, if it’s a response to being in midlife – those numbers are staggering,” said Carol Tappen, director of operations for the Eating Disorders Institute.

Women over 30 who seek treatment tend to fall into three categories, said Holly Grishkat, who directs outpatient programs at Renfrew.

Some have had an eating disorder for years. Others had a disorder in remission that resurfaced because of new stress in life, such as a divorce or loss of a parent. A third group, the smallest of the three, includes women who develop an eating disorder late in life.

Of Renfrew’s patients over age 30 in 2005, about 60 percent first suffered from an eating disorder at 18 or younger. Nearly 20 percent said they were 30 or older when they first encountered the problem.

While body image is an issue for any age group, women over 30 are dealing with problems that teens don’t have, such as work, divorce, stepchildren and aging parents.

“It’s not about wanting to be the cheerleader or being the homecoming queen,” said Tappen. “It’s much bigger than that.”

They also are dealing with an aging process, or childbirth, that changes the way they look.

“One day, (a woman) wakes up and the kids are gone and she has a sense that nobody really needs her. She looks in the mirror and she says, ‘My body is shot,'” said Tappen. “This woman says, ‘You know, that’s it. I’m going on a diet.'”

Tappen said the aging of the huge baby boomer population may be one reason the Eating Disorders Institute has seen more older patients. Not only are there now more people in this group, but this population has traditionally been image-conscious, she said.

“Baby boomers have always cared about how they looked, what they wear,” she said. “I think a lot of eating disorders years ago went undiagnosed because it was the thing to do.”

The Eating Disorders Institute is building a new facility, set to open in 2009, that will offer a treatment track for mature patients.

Grishkat, of The Renfrew Center, encourages older women to seek age-specific treatment programs. Some may be embarrassed to get help alongside very young women. Also, some older women may take on maternal roles for younger girls when they should be focusing on themselves, she said.

“It’s not a lost cause at 30, 40, 50 years old,” she said. “You can still get better. In some sense, the older women do better in recovery than younger women. They tend to be more motivated.”

For Smith, motherhood was a motivator. When she entered treatment, she was told she might have internal damage that could affect her ability to have children. Now 39 and out of treatment, she and her husband are parents to a 2-year-old boy and live in New Jersey. She says she’s in recovery, and her primary goal these days is to be healthy.

“There’s no question I put on weight because I wanted to have a baby,” she said. “And I stay healthy right now for my baby.”