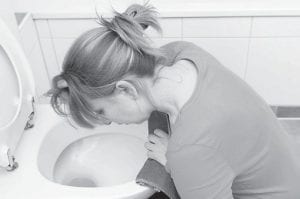 It’s dreaded by moms to be but morning sickness is actually a good sign — for the baby, a government study shows, confirming common pregnancy lore and less rigorous research.

Women with nausea early in pregnancy were half as likely to have miscarriages and stillbirths as those who sailed through the first few months. Miscarriages were also less common in women who had nausea plus vomiting, although the benefit was stronger for those who just had nausea.

Led by researchers at the National Institute of Child Health and Human Development, the study involved almost 800 women who’d had at least one miscarriage and then became pregnant again. They were asked to record symptoms in daily diaries for the first eight weeks of pregnancy and in monthly questionnaires through the end of the first trimester.

Stefanie Hinkle, the lead author and a researcher at the national institute, called it the most rigorous study to date on the topic, but also noted that it’s unclear if the results would apply to firsttime pregnancies.

Results were published this week in JAMA Internal Medicine.

There were 188 miscarriages and stillbirths, affecting almost 1 in 4 pregnancies, which is similar to national estimates. More than 90 percent occurred in the first trimester.

Of the nearly 800 women in the study, 443 completed daily diaries, and just over half of them reported nausea by the eighth week of pregnancy, also similar to national estimates. About one in four had nausea and vomiting. The researchers then used statistical analyses to calculate that nausea alone, or nausea with vomiting, was linked with a 50 percent to 75 percent reduction in the risk of pregnancy loss.

Causes of morning sickness are uncertain but it has been linked with high hormone levels that occur early in pregnancy. How it might reduce chances for miscarriages is also uncertain. Theories include the idea that nausea could make women avoid potentially harmful substances, including bacteria-contaminated food, which can increase risks for miscarriages.

Hinkle said the results should be reassuring to women concerned that morning sickness could be harmful. But she said unaffected women shouldn’t be alarmed.

“Every pregnancy is different and just because they don’t have symptoms doesn’t mean they’re going to have a pregnancy loss,” Hinkle said.