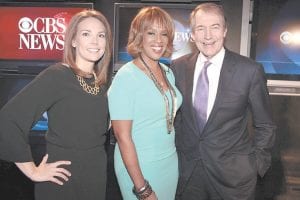 Erica Hill, Gayle King and Charlie Rose (from left) are the new hosts of a morning show that will replace “The Early Show.” The new show premieres Jan. 9 and will air from 7 until 9 a.m. on CBS. (AP Photo/CBS)

Within the first minute of the “CBS This Morning” launch next week, producer Chris Licht promises, viewers will see something completely new to morning television.

He’s keeping the details a surprise, other than to say it will be a quick and entertaining way to catch up with the world. Done well each day, Licht hopes it can become a calling card.

The new year looks to be pivotal for network morning shows. CBS and ABC’s “Good Morning America” are positioning themselves as distinct alternatives to the longtime king, NBC’s “Today” show, which faces uncertainty over anchor Matt Lauer’s future.

CBS is scrapping “The Early Show” on Jan. 9 in favor of a new broadcast anchored by Charlie Rose, Erica Hill and Gayle King and said it wants to be more substantive. “Good Morning America” is the fastest-growing program, emphasizing a breezy approach behind James Goldston, the producer who made “Nightline” a success in recent years.

“Good Morning America” was the last competitor to seriously challenge “Today,” which hasn’t lost a single week in the ratings since 1995. “Today” averaged 5.42 million viewers for its first two hours in 2011, up 1 percent from the year before, the Nielsen ratings company said. The “GMA” average of 4.85 million viewers was up 10 percent over 2010, while CBS’ “The Early Show” was down 7 percent to 2.55 million.

The ABC show was up 17 percent in Nielsen’s measurement of how many people watch its commercials, while the other two shows were down. “That’s a lot of money right there,” said Goldston, executive producer of “GMA.”

Efforts to make the show more engaging and creative have borne fruit, Goldston said. He believes viewers have also embraced the anchor team of George Stephanopoulos and Robin Roberts, and newcomers Josh Elliott and Lara Spencer.

“We’ve inherited that key, hardto put-your-finger-on thing of which team is having the most fun out there, and which team seems to get on best,” he said. “Right now, that’s our team. And I think that is very important on morning television.”

Goldston is a talented, stylish producer who has smoothly integrated Elliott and Spencer into the broadcast and managed the change to a different set, said a predecessor, Shelley Ross, former executive producer of both “Good Morning America” and “The Early Show.”

Ross questioned the preponderance of more entertainmentoriented segments in the ABC show’s second hour, where a story about whether royal sister Pippa Middleton inspired women to get butt implants got a lengthy examination.

So, apparently, did Roberts, who told Newsweek in November that “I want to be No. 1. I don’t want to sell my soul to the devil to be No. 1.” She said the show needed more hard news. “We give them a lot of candy right now.”

Goldston said Roberts’ remarks were made “entirely in jest.” Roberts also said in an email to The Associated Press that the “candy” comment was said jokingly. “It’s all about striking the right balance … and I think we do a darn good job of doing that every morning.”

“We make no apologies,” he said. “ It has always been the case that the show develops and changes through the course of two hours. I think what’s important is that the show stays true to itself, that there’s a continuity of tone and approach, that we’re not asking the anchors to be different people at different points in the show. I think we’re being very true to that.”

ABC recently announced that Stephanopoulos, while keeping his weekday job at “Good Morning America,” will also return to his pre- ”GMA” job as host of the Sunday-morning political talk show “ This Week.” The network believes the dual roles will leave ABC well placed to get political stories during the election year.

Goldston, who wants to keep up the momentum on his show, won’t even publicly commit to giving Stephanopoulos a day off during the week so he can do “This Week.”

There’s some question about whether ABC’s viewership gains are inflated due to a technical adjustment that affects Nielsen’s ratings. Although Nielsen is said to measure the entire twohour show, in reality the ratings are for only the portion in which national advertisements are run. In May, ABC moved up the last of its national ads by about 10 minutes — meaning Nielsen’s average viewership figure cuts out 10 minutes when the audience is at its lowest.

ABC would not say whether this switch improved its ratings, but the network did point out that its viewership in the first quarter of 2011, before the change was made, was also up 10 percent.

Whatever the impact, there seems little doubt that ABC’s audience is growing. The same cannot be said at CBS, even though news executives have pushed “The Early Show” in a meatier direction over the past few months.

CBS has the opportunity to start clean on Jan. 9. The morning show gets a complete revamp, with a new studio, name and Licht, former producer of MSNBC’s “Morning Joe.”

CBS’ mantra is to offer something different.

“Right now viewers basically have two choices,” Licht said. “They have the ‘ Today’ show and they have the ‘ Today’ show (imitator) with probably a little bit more broad appeal stuff. Those two shows are very similar but are both good at what they do. We need to try to find a third thing. Maybe viewers don’t know if they like it or not because it doesn’t exist right now.”

CBS has let out a handful of details about how it will work. Rose and Hill will be on the show’s first hour, starting at 7 a.m., with former talk-show host King starting at 8 a.m. There’s no weather forecaster. No cooking segments. Veteran newsman John Miller will have a prominent role.

The network won’t be forcing spinach on its viewers, figuratively speaking. But it won’t promote a “cult of personality” either, Licht said.

“If people want to feel like they’re part of a family, it will evolve organically,” he said. “I am not trying to sell that Charlie and Gayle go out for drinks and they’re just part of one big happy family — here we are, with a slow motion of them hugging each other. That’s not what this is.”

The new anchor team was met with widespread skepticism throughout the industry: How does hiring a former syndicated talk-show host and noted PBS interviewer square with the desire to run a hard news broadcast?

Rose is a “kick back and think guy,” Ross said. “And that’s not the morning.”

Licht said Rose is a terrific interviewer who has relationships with the people who run the world in media, business and politics.

“I don’t think anyone would dispute that,” he said. “The skepticism is ‘Is he right for the morning?’ And I don’t think you’re going to know that until you see that.”

For both CBS and ABC, a rare competitive opportunity may present itself. It’s not clear whether Lauer wants to continue when his contract ends this year. NBC has discussed a role on the “Today” show with “American Idol” host Ryan Seacrest, with some reports that he could replace Lauer.

Hugely important decisions loom. “ Today” hums along when there are good transitions — Katie Couric to Meredith Vieira, or Bryant Gumbel to Lauer — but runs aground from mistakes like Deborah Norville replacing Jane Pauley.

“Usually the other programs catch up when the ‘Today’ show screws up,” said Stephen Battaglio, author of “From Yesterday to Today: Six Decades of America’s Favorite Morning Show.”