Morris family has basketball in their blood 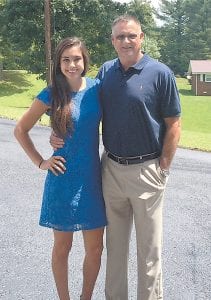 Lewis Morris, head boys’ basketball coach at Bell County High School, was a prolific scorer in high school just like his daughter, UK sophomore Maci Morris. He’s also happy with the basketball program and is looking forward to next year.

When it comes to playing basketball, Maci Morris has to have it in her blood.

“I was a baseball player first,” Lewis Morris said. “I could have gone to Kentucky on a baseball scholarship, but back then you could go to East Tennessee State and play both. Coming out of high school, I thought I could do that with no problem. My dad was the first baseball All-American ever at Cumberland College. His junior year he hit over. 500 and his senior year he hit about .480.”

Former UK quarterback Freddie Maggard was Morris’s teammate at Cumberland High. He estimates that when you count Maci Morris’s parents, uncles, aunts, grandparents and cousins, the family would have scored over 20,000 points. Lewis Morris laughed at that number, but also admitted it would be a lot of points.

“My wife has a basketball that has ‘1,000 point scorer.’ They did not do that for us,” he said. “They kept a scorebook for us but no one ever told us exactly how much we scored.”

He said well known Kentucky prep coach Billy Hicks once told him only two players in the state had ever scored 40 or more points in a game against him. One was Richie Farmer. The other one was Rick Morris, Lewis’s brother.

“Coach Hicks said Rick would have had 60 if there had been a 3-point line then,” Lewis Morris, now the head boys’ basketball coach at Bell County High School, said. “He was my older brother and was a lot better than me. He was the best shooter of any of us. He probably scored 1,000 points just his junior and senior seasons.”

Lewis Morris was no slouch. He estimated he averaged about nine points per game as a freshman, 13 as a sophomore, 22 as a junior and 27 his final season.

“My sister scored a lot, too,” Lewis Morris said.

So did Maci Morris. She finished her Bell County career with 3,368 points – sixth best in state history – and averaged 25.6 points per game her senior year when Bell went 29-3 and reached the state tourney.

During her freshman season at Kentucky, she scored 281 points and is the team’s third leading returning scorer.

While things went well on the court – she started all 33 games and averaged 25 minutes per game – for Morris, the offseason produced a lot of turbulence with coaches and players leaving. Kentucky will go into next season with only eight players.

“Myself, I am really happy with the way things are going,” Lewis Morris said. “Not everybody is leaving. She has been happy up there. She has not said a word about anybody or anything to me. She’s looking forward to next season and so am I.”

One thing did change this year for Maci — she finally beat her father in a game of H-O-R-S-E.

“I guess I am just getting old,” Lewis Morris said. “She finally got me. But she did it by getting me off the court and making me shoot from the grass where my legs didn’t have as much bounce.”

He used to take his daughter fishing — sometimes for the entire night — and still has fond memories of those times. Now he jokes she seldom comes home from UK.

Maci Morris also has a sense of humor that we might not always see. One time she put a fake snake in the boots her father left outside.

“When we went to put his shoes on, he found it and it scared him,” Maci Morris said. “He ended up trying to chop it up with a shovel because he thought it was real.”

“It did scare me at first and I might have picked it up and thrown it. But I did not chop it up. She is exaggerating that part,” Lewis Morris said.

It’s not breaking news that former Wildcat Alex Poythress thinks Kentucky is “going to be pretty good” next season. Every Kentucky fan — and coach John Calipari – believes that.

However, Poythress and former UK teammates Tyler Ulis and Devin Booker actually got to play pick-up basketball with Calipari’s next team.

“They’re going to be real good. Real athletic at the positions. Isaiah (Briscoe) is really bringing some leadership, so if he knows how to handle his troops they’re going to be really fine when it’s said and done. Really impressed by them,” Poythress said while helping Calipari with a camp at UK last week.

Jamal Murray was also at the camp. He’s a believer in Briscoe, a sophomore, as well.

“He was ready for it last year. Last year was more learning for all of us as freshmen. But this year it’s his time to lead,” Murray said. “The best thing about it is he’s going to get it done on the defensive end more than anybody, so I think that’ll help a lot.”

Tyler Ulis surprised many with his play in the NBA Summer League. Former UK teammate and NBA Rookie of the Year Karl- Anthony Towns was not one of them.

“That’s the difference with Tyler. His heart and his skill is just too much to pass on. I’m surprised he dropped so much in the draft, but Phoenix has a good record of knowing what Kentucky guards can do. They drafted the right player and they got a player who’s probably going to be playing in this league a long, long time. He has the skill level, the leadership qualities and has the drive to be something very, very special.”

Most say the same about Towns, who admits he would like to be playing in the Olympics just as former teammate Devin Booker said he would.

“I want to definitely play in the Olympics. That’s a dream come true. That’s something I’ve always wanted to do in my life is represent my country in the Olympics,” Towns said. “I think Devin has the talent and the ability and the leadership qualities to make the Olympic team. His time is coming.”

Last week I let Tom Leach, the play-by-play voice of the UK Radio Network, explain what Oscar Combs had meant to him. This week I turn to Tyler Thompson of Kentucky Sports Radio to share what Combs, who decided not to be on the UK Radio Network pregame shows this year for the first time in 20 years and also founded The Cats’ Pause, meant to her.

“Oscar Combs has been as much a part of my UK fanhood as any player or coach. Growing up, I read the Cats Pause magazine, religiously, waiting by the mailbox for it to come in so I could pore over the pictures, articles, and, of course, Oscar’s columns. In fact, when I went away to college in North Carolina, my father forwarded my subscription so I could keep up with the Cats in Tar Heel and Blue Devil country,” Thompson said.

“Trips to watch the Cats in Rupp Arena were never complete without listening to Oscar on the pregame show in the car, and when I transitioned to covering UK as a member of the media, meeting him for the first time was a landmark moment.

“Since then, I look forward to conversations with ‘Mr. Combs’ about everything: UK sports past and present, life, frogs. As the editor of UK’s most popular fan site, it never escapes me that Oscar laid the path for us so many years ago, and for that, I’ll be eternally grateful.”

Kentucky football continues to make up for lost time when it comes to honoring four men — Wilbur Hackett, Greg Page, Nate Northington and Houston Hogg — who broke the color barrier not only at UK but also in the Southeastern Conference.

“Every year we have Wilbur and the guys come back and talk to our team, explain the history, how proud we are of the four players that did make a stand and start and break the color barrier in the SEC,” Kentucky coach Mark Stoops said. “That’s something that we should embrace here in Kentucky. We’re proud of those guys. It’s the right way to honor them. We’re excited about that, our players getting to know those guys more and more every year.”

Kentucky will place a statue honoring the four pioneers outside the new training facility and will have a dedication ceremony Sept. 22 two days before hosting South Carolina.

Hackett and Northington were both at UK’s Fan Day signing copies of the preseason schedule poster that honors their legacy.

“I thought it was appropriate because they’re on the poster and we’re recognizing those guys and it was good for our fans to be able to see them, spend some time with them,” Stoops, who also invited other former UK players back to spend time with his team before and after Fan Day, said.

“It was a great turnout. I love having them here watching practice,” Stoops said.

Offensive lineman Drake Jackson of Woodford County is one of the high-profile players in Kentucky’s freshman class. He likely will play center this year and that means he’ll get a chance to learn from senior Jon Toth, the player many consider the most valuable player on the UK team.

“The biggest thing I have learned from him already is how to be a college football player. Meaning how to conduct yourself, how to sit in the meeting rooms, how to lift, how to recover, how to do all those things,” Jackson said. “He has been a great example not only for me, but everybody. There have been a lot of other guys who have set great examples. But Toth is definitely one to look up to.

“You know what is expected. Sometimes you might think you are doing it right, but you are not. You might think stretching after a workout is enough to recover or you pull a groin and think sitting out a day is okay. Toth really teaches you how to be a professional and conduct yourself and how to be a college football player and how to take care of yourself.”

Remember you can contact me anytime with comments, questions or suggestions at larryvau@gmail.com or on Twitter at @ vaughtsviews.