Morris loved Italy, but happy to be home 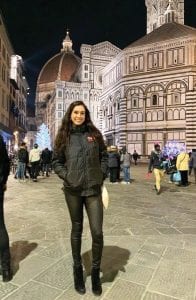 Having the opportunity to play professional basketball in Italy was an experience that former Kentucky basketball star Maci Morris knew would be unlike anything she had done before.

It started out that way, too. She was leading her team in scoring, getting to see and do new things, and basically just having fun.

Then the coronavirus started spreading throughout Italy.

“I was having a good time. It was nice to go around, explore, see different cities, engage in a different culture. It was just fun playing basketball and having fun again with it,” said Morris. “I loved the city of Florence. It was close to my city and me and my roommate had planned to go to some other places before this stuff all hit.”

Morris had played for USE Scotti Empoli — about an hour from Florence — since early October and was leading the team in scoring (15.5 points) and minutes (31.6) per game. She also had made a team-high 44 3-pointers and was hitting almost 41 percent from the field. Morris was also adding 4.9 rebounds, 2.3 assists and 1.3 steals per game.

Former Kentucky standout Maci Morris was having a “good time” living and playing professional basketball in Italy before the coronavirus changed all that. Now she’s just happy to be home in Bell County. She was leading her Italian team in scoring and minutes played when her season ended. She’s not sure if she’ll play in Italy again next season or not.

She managed to get home to Bell County last week about 24 hours before the travel ban from Europe went into effect. She decided to put herself into a two-week quarantine even though she’s not been sick to make sure there’s no way she might pass the virus to anyone else.

Her mother, Patti, admitted she got nervous the closer it got to time for her daughter to return home.

“I kept waiting for somebody to jerk the rug out from under her,” Patti Morris said. “I try not to worry until stuff happens. I don’t sweat things until they happen but I am glad to get her home.”

Much of Italy has been under a total lockdown to try and control the spread of the virus. Morris said she was not in the “red zone” that had the most restrictions.

“It had been several weeks since we played a game and they had suspended the season until April 3 and we did not know if we would even play then,” Morris said. “Where I was at you could at least walk around but not in a group of people. The grocery stores were open, and some businesses. But everything shut down at 6 (at night).

“All sporting events were cancelled. I was not even allowed in the gym. They locked us out. I could not lift or anything. This is probably the longest break I’ve had from basketball forever and probably will just not do anything until my two-week quarantine is up.”

Morris, a former Kentucky Miss Basketball, is the University of Kentucky’s sixth all-time leading scorer with 1,692 points and her 252 3-pointers are second all-time. Her 41 percent 3-point career mark is the best at UK.

She had adjustments to make on and off the court in Italy. Some were as simple as no air conditioning and clothes dryer where she lived. Italians also ate dinner nightly at a much later time than Morris was used to and she had some issues with the language.

On the basketball court, games were more sporadic. The team had a 15-day break between games in November and an 11-day break in October. Never did the team play more than two games per week.

Morris said playing in a small town made it easier for fans to interact with her. She would get asked if she played basketball on trips to the grocery store and fans would talk to her about basketball.

“But it was nothing like Kentucky fans,” Morris said.

Morris isn’t sure about her future basketball career. She was an undrafted WNBA free agent who went through training camp with the Washington Mystics last year before getting cut and signing to play in Italy.

“I was playing really well when our season ended,” Morris said. “My body felt really good. I was happy with what I was doing.”

Would she return to Italy again to play?

“Possibly. I don’t know,” Morris said. “It depends on a lot of things. Do I get offered another contract or get a contract offer somewhere else? Do I want to keep playing basketball or not? I am just praying and seeing where God leads me when it is time for me to make a decision about my future.”

Burton is a top 250 player nationally and the 6-4, 270-pound lineman has offers from Alabama, Clemson, Ohio State, Oregon, Oklahoma, Texas, Tennessee, West Virginia and others.

“I really think he could be a future NFL player,” Rowland said. “I think Kentucky has a good shot. I have heard he really likes UK. He is a very savvy kid. Some guys do not have a plan and are not organized then you have guys like him who are very calculated. He knows the impact of his words and where he might end up.”

Crowdus left Lexington last year to play his junior season at IMG Academy in Florida but is now back.

“He competed against some of the best defensive backs and receivers daily in practice,” Rowland said. “He has been timed sub 4.4 (seconds) in the 40 (yard dash). He has great speed.

“He has to improve his production and route running. He’s probably still a bit raw but he has speed you cannot team and that’s something most staffs have no trouble gambling on.”

Burton even suggested on Twitter that they could be a “package deal.”

Malaki Branham is a 6-5 small forward from St. Vincent-St. Mary (Akron, Ohio), who is one of the top 25 players in the 2021 recruiting class.

What about his cousin playing for John Calipari’s Wildcats?

“He wants to,” Kalil Branham said.

Vince Marrow didn’t want to “toot my own horn” but says that LSU transfer Kelvin Joseph reminds him a lot of himself in some ways.

“I am not going to toot my own horn too much but I remember when I was at Toledo (playing tight end) and nobody knew about me (as a player),” Marrow, a 1992 draft pick by the Buffalo Bills who also played for Kansas City and Carolina, said.

“Just watching this kid, he has all the tools. He has size, can run, plays physical. He played as a true freshman at LSU. Just watching him last season in drills and on scout team, he has a chance to be as good as any cornerback we have ever had. He can play.”

Marrow believes having Joseph eligible after a redshirt season and the return of safety Davonte Robinson after he missed last season with an injury will bolster an already strong secondary.

“It’s really going to be interesting to see all that talent on the field together next year. We are going to be three deep at certain positions with guys that can all really play,” Marrow said.

Quote of the Week: “There’s no list for any of this. I have an undergraduate degree, a master’s degree from Syracuse. This was never in one of my master’s classes. We have a few law degrees in their offices. I checked with each of them. No, they never had this one in our law school classes. So that’s reality,” SEC commissioner Greg Sankey after cancelling the SEC Tournament last week.

Quote of the Week 2: “I know we lost Lynn Bowden but I still think we are going to be good at that position. I think Josh Ali will be a star. He’s our best route runner and is really fast,” Kentucky tight end coach Vince Marrow on UK’s receivers for next season.

Quote of the Week 3: “Kenny makes it about the kids. He shuns the spotlight, and yet isn’t it funny how those kinds of people – the ones who care only about their work – are the ones we honor at the end of the day,” Kentucky coach John Calipari on assistant Kenny Payne being selected for A STEP UP Hall of Fame honoring assistant coaches.