By GREGORY KATZ
The Associated Press 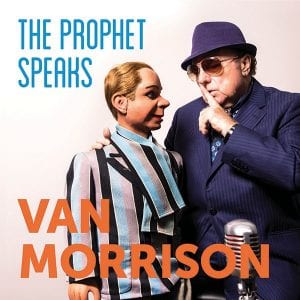 The first thing longtime listeners to Van Morrison will notice is the lack of angst — his 40th studio album is missing the usual complaints about the greed and cynicism of the music business. The next and most remarkable aspect is the relaxed, easy groove that permeates through “The Prophet Speaks,” which finds Morrison relishing his relatively recent incarnation as a jazz singer backed by an expressive, moody band.

It’s rather remarkable that Morrison has been singing for well over half a century and he’s rarely sounded so comfortable and unforced.

He’s once again using the considerable talents of Joey DeFrancesco and his band. The results are impressive, with 73-year-old Morrison focusing on the feel and texture of each song rather than seeking the revelatory, soul-stretching crescendos of some of his earlier works. He seems to have found a style that fits him as he ages, a blend of instruments, including Hammond organ and horns, that could have been heard in the late 1950s but sounds perfectly fresh today.

There are a few straightforward covers of old favorites, including John Lee Hooker’s “Dimples” and Solomon Burke’s “Gotta Get You Off My Mind,” that let Morrison pay tribute to departed performers he used to share bills with. A half-dozen new songs — including “Spirit Will Provide” and the title track — conjure up Morrison’s more mystical approach to lyrics and arrangement.

Even more compelling is “Ain’t Gonna Moan No More,” a Morrison original that both swears off his often complaining, self-pitying ways and pays homage to the greats who preceded him, including Muddy Waters, Hooker, and, in some depth, Louis Armstrong.