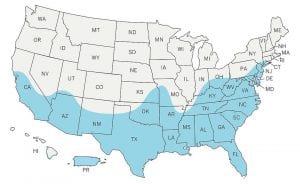 This image made available by the Centers for Disease Control and Prevention shows a map of the United States with an estimated range of the Aedes aegypti mosquito for 2016 indicated in blue. Federal health officials say the mosquitoes, including the Aedes aegypti, that can transmit the Zika virus may live in a broader swath of the U.S. than previously thought — but that doesn’t mean they’ll cause disease here. (CDC via AP)

The Centers for Disease Control and Prevention posted new maps of the estimated range of Aedes aegypti mosquitoes, and a related cousin, on its website. Instead of just being in the southern U.S., the new maps show the range for Aedes aegypti (AYE’-dees uh-GYP’-tie) could extend into parts of the Midwest and Northeast.

Previous maps were about a dozen years old, and CDC officials describe the new ones as a best understanding of where the mosquitoes have been seen recently or previously — even though it’s not clear if very many actually live in every spot shaded on the map. It’s possible the range increased, or just that scientists have done a better job looking for them.

CDC Director Tom Frieden said the implication is “there are more places at risk than realize they’re at risk, given where the mosquito is likely to be present.”

But there’s a big caveat: Even if the mosquito lives in a certain spot, it has to bite an already infected person in order to spread Zika, or related viruses, to other people.

Also unlike many Zika-plagued areas, the mainland U.S. has air conditioning and screens to keep the insects out of homes where they commonly live. That’s why the website says: The “maps are not meant to represent risk for spread of disease.”

Zika is spreading rapidly through Latin America. While most people experience mild or no symptoms, Zika is suspected of causing babies to be born with abnormally small heads and underlying brain damage, after a rash of such cases in Brazil.

The CDC says more than 270 U.S. cases have been reported among travelers.