Most from ’76 champs want UK to set mark 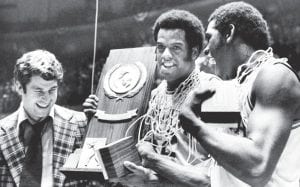 Indiana coach Bobby Knight, left, and team members Scott May, center, and Quinn Buckner right, celebrated with the trophy after winning the NCAA Basketball Championship in Philadelphia on Monday, March 30, 1976. They beat Michigan 86-68. Buckner and his 1975-76 Indiana teammates don’t plan on celebrating if their reign as college basketball’s last undefeated team continues. Instead, the Hoosiers have waited 39 years to welcome another undefeated national champion if Kentucky goes 40-0. (AP Photo)

Quinn Buckner says he and his 1976 Indiana teammates aren’t chilling any champagne to uncork in celebration of a Kentucky loss.

Instead, the nation’s last undefeated college basketball team is eager to end the 39-year wait to add another member to the club — even if an old rival is trying to make history in the Hoosiers’ backyard.

“These are young people who have a terrific opportunity to do something great,” said Buckner, an Olympic gold medalist, an NBA champion with the Boston Celtics and now a TV analyst for the Pacers. “I think for me and my teammates, it’s hard to pull against young people.”

Perhaps these Hoosiers feel safe knowing that, two years ago, the NCAA named them the greatest team in college history. Or perhaps it’s because their reign has survived so many other threats.

Last March, Wichita State was 35-0 when it lost to Kentucky on the first weekend of the NCAA Tournament.

In 1991, defending champion UNLV seemed like a lock to finish unbeaten after reaching the national semifinals at 35-0. Then it ran into Duke.

Larry Bird and Indiana State looked like the team of destiny in 1978-79, going 33-0, before falling to Magic Johnson and Michigan State.

Now comes Kentucky, winners of 38 in a row. To complete their pursuit of perfection, the Wildcats must beat Wisconsin on Saturday in a rematch of last year’s semifinal, then beat either Michigan State or Duke on Monday night.

The Hoosiers are surprised that the chase has continued for nearly four decades.

“I didn’t give much thought about it when it was over,” said Tom Abernethy, one of Indiana’s starters. “It’s crazy, it’s gone this long.”

Not everyone in the Hoosiers’ camp is rooting for Kentucky.

Former coach Bob Knight has said that he didn’t believe John Calipari should still be coaching after Massachusetts and Memphis were forced to vacate Final Four appearances because of NCAA violations that occurred during his tenures.

“What Calipari has done a pretty good job with is keeping them guarding,” said Buckner.

Comparing the two teams from such different eras of college basketball is impossible.

Kentucky has already won six more games than Indiana did. The shot clock has virtually eliminated the four-corner offense undermanned teams could use to slow down the Hoosiers, and Kentucky’s quest has survived in part because of a 3-point line that didn’t exist 39 years ago.

And while Indiana relied heavily on juniors and seniors, the Wildcats have thrived in an era of young players leaving early to the NBA.

Even if Kentucky does finish with an undefeated record, the Wildcats may never match Indiana’s staying power.

From late in the 1973-74 season through the first part of the 1977-78 season, Indiana went 67-1, winning 52 games by double digits. They won four consecutive Big Ten titles finishing the last two with 18-0 conference records.

Plus, Indiana nearly pulled off back-to-back perfect seasons. When a broken arm kept All- American Scott May out of the 1975 NCAA Tournament, Kentucky defeated the Hoosiers in the regional final 92-90. Three months earlier, Indiana had beaten Kentucky 98-74.

“I’m only going to go by what Quinn and Scott and Coach Knight have said a number of times and they said, yeah, we were the better team,” said Steve Green, a senior in 1974-75. “We feel a special bond with the ‘76 team, but we didn’t win it.”

That loss, however, provided the inspiration for the next season.

The Hoosiers developed a close bond and even created their own signals to get the job done. For instance, Wilkerson said if he noticed Buckner getting tired, he would simply tug on Buckner’s shorts and the two would switch defensive assignments to keep Buckner fresh.

“We could have won 50 games. It wouldn’t have mattered because we weren’t going to lose,” Wilkerson said. “We played all the top teams. We played UCLA the first game our senior year, so our thing was that we were going to start at the top and work our way through.”

Kentucky took on Kansas, UCLA, North Carolina and Louisville before January, blowing through the SEC and surviving a close call against Notre Dame on Sunday. And, just like the old Hoosiers, some contend this isn’t even the best Kentucky team of the decade.

One former odds-maker said last week that this team would be an underdog against the ‘76 Hoosiers, the ‘91 Runnin’ Rebels, the ‘68 UCLA Bruins and even the 2012 national champion Wildcats.

They don’t have to face any of those teams in Indianapolis.

“My hat’s off to them if they make it because they’ll be in great company,” Wilkerson said. “I don’t know if they’ll last as long as we did, but they can’t take our place.”