Most people are eager for senior citizen program to begin again 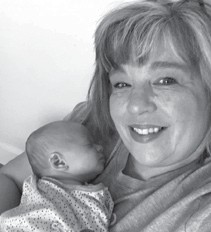 Mom had a very good surprise visit the other day from two of our close neighbors that were also our neighbors when we were growing up, Sandra Sexton Wilson and Phyllis Begley Combs. Charlene was here with Mom and she said they had a really good visit reminiscing about our growing up days. They also talked about getting a Cane Holler reunion together sometime. Sounds like a good idea to me.

I wish children were able to get out in the neighborhoods and play with their friends without all the worries they face today. I don’t even remember having to tell Mom we were going up the holler, when we went outside it’s untelling where we would end up in the holler, or whose house.

I was so excited to get to see Alfred and Wanda Webb at the rec center Monday morning. It has been too long since I have been able to talk with them. Also got to see one of my good Rook-playing friends from Letcher County Senior Citizens still at the exercise machines. Lloyd Caudill, you inspire me to keep exercising no matter what. 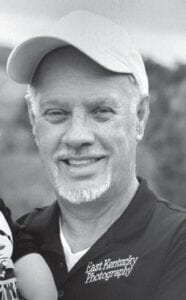 Ernie Sexton, the man behind many sports pictures here in eastern Kentucky, celebrated his birthday on April 10.

We’re still waiting on our program to get back up and running. Just want you to know, Debbie Baker and Carmen Brock, we miss it terribly. I miss listening to Lizzie Mae Wright tell of her growing-up days. I miss working the jigsaw puzzles with David Williams and Rose Hammonds and Rose Collier, while listening to the Rook games going on in the background. I just miss it all.

I guess everybody that is connected with this area already knows about the devastating news we’ve had this past week. Even though Mike Harris had been battling cancer for awhile, his death was still a shock to so many. He was a great asset to our county.

Then again our community received the devastating news Thursday of the wreck that killed Billy Keith Adams, and also the driver of another car involved in the wreck. Keith’s mom and dad, Billy and Connie Adams, were also injured and as I type this on Monday evening, Billy is still in serious condition at UK Hospital. Connie is the niece of Preacher Bill Craft. Connie was released from the hospital to go be with him at UK. 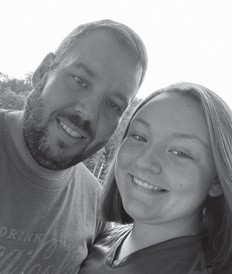 Richard and Betty Brown. She had a birthday on the 9th.

I first met Keith when I was teaching second grade at Martha Jane Potter Elementary. He came to the school to do a performance for the kids as The Cat in the Hat for our Read Across America celebration. I was totally amazed at his talent. At the time he wasn’t involved in education and I thought to myself, “This man definitely needs to be working with young children instead of cutting hair.” He was an unbelievable influence on so many lives, to say the least.

We’ve had some deaths also in our church, Letcher Independent Baptist. One sister in the church I had requested prayer for, Brenda Cupps, passed away last week. She had been taking chemo for stomach cancer, but Easter Sunday we were told she had been with Hospice. Also, Pat Miles’s brother Paul Bryant, that I had requested prayer for, passed away. Betty Frazier is still asking for prayers for her son Orville Sturgill and her brother Donnie Ratliff. 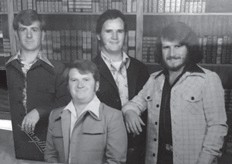 My sister Charlene Mason asks that everyone put Stephen and April Meade’s son Harley on their prayer lists. He has an appointment to see a neurologist this coming week in Lexington. Stephen is Ricky Mason’s nephew. They are members at Frist Baptist Church in Whitesburg and are very active in the church.

Lots of birthdays to mention. On April 9 Betty B, Brown and Doug Banks had birthdays. Ernie Sexton and Robbie Gross celebrated on April 10. Patty Sexton, Missy Campion Baker, Margie Walters and Maxine B. Quillen had birthdays on the 12th. Linda Meade Caudill on the 13th and Blake Cook and Caron Crawford Mc- Cracken will celebrate on the 14th.

Please remember to still be in prayer for my pastor and his family, Bill and Sandy Jones. I’m sure all the pastors could use our prayers with the changes that have been made since COVID. Our church is beginning to show some improvement in our attendance. Can’t wait till we can handshake again. 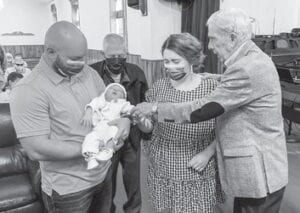 Nick and Haley King with their son, Hayden Archer, being dedicated to the Lord by Preacher Bill Craft.

As Oma always said try your best to be in church if at all possible. Your church needs you now more than ever and so does God.