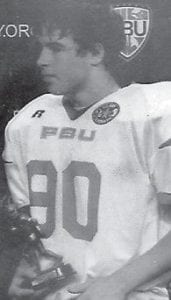 — Thirteen-year-old Tyler Jopes, a student at Bowling Green Junior High School, was chosen to play in the first-ever Youth All-American Bowl at the Alamodome in San Antonio, Tex. He was one of 44 football players selected from thousands of nominations nationwide. He scored the only two touchdowns for the East team and was presented with the Most Valuable Player award for the East team. He has Cowan roots, and is the son of Ron Jopes and Cherie Cothern, grandson of Russell and Judy Banks, and great-grandson of Mattie Vern Banks and the late Jeff Banks.