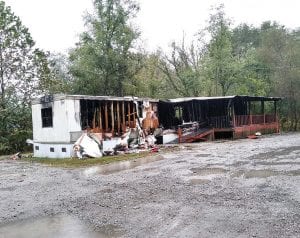 A single-wide trailer at Jeremiah was a total loss after a fire near midnight Sunday night. No one was injured in the fire. (Photo by Sam Adams)

A woman and her daughter were left homeless Sunday night after a fire destroyed their rental trailer at Jeremiah.

Karen Thomas and her daughter were home when the fire started about midnight Sunday night, but no one was injured in the blaze, which gutted their rented mobile home.

The trailer, owned by John Walters, was one of two rental trailers near the mouth of Doty, less than a mile from Letcher Volunteer Fire Department. Firefighters from that department responded and called for assistance from Sandlick, Colson, Mayking and Neon fire departments. Despite five departments fighting the fire, the trailer and its contents were a total loss.