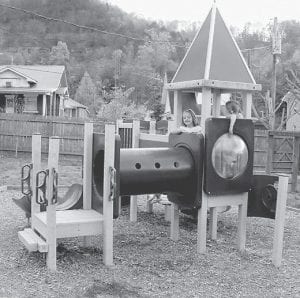 Mountain Montessori students Arwen Sergent (left) and Emma Quillen play while a mama duck sits on her nest under steps to a slide located on the left side of the playground equipment.

When children at Mountain Montessori School came back to school after spending a week on spring break, they found something in the playground that wouldn’t leave.

Deana Napier, acting director of the school located in downtown Whitesburg, said a mama duck had built a nest underneath a slide in the school’s playground during the first week of April.

“Of course we have ducks all the time and the kids usually chase them off,” said Napier.

Napier said the animal the children have named “the duckie”

is the first to remain in the playground area.

“I guess she didn’t know what she was getting herself into,” said Napier.

Napier said she told the children not to touch the four eggs because she had heard that if the eggs are touched the mother will desert the eggs.

“Once we realized the eggs were out there, one of the kids touched the eggs and she still came back and nested on them,” said Napier.

Napier said the children were curious about the duck so the staff spent a whole day teaching them about ducks and eggs. 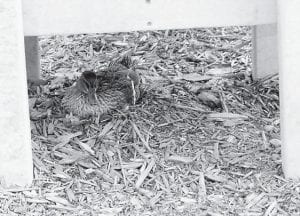 This mama duck made her nest under playground equipment at the Mountain Montessori School in Whitesburg. The children play while the duck guards her eggs.

“They didn’t understand what was going on at first,” said Napier. “The kids are absolutely learning from this.”

The children are learning firsthand what a duck does while she waits for her eggs to hatch.

“The kids have been watching the daddy duck take care of the mommy duck and bringing her food,” said Napier.

The children and duck have learned to accept each other.

“The kids play around her. Sometimes she will get upset and fluster up but she doesn’t get off her nest,” said Napier.

The duck walks around the playground when the children are inside the school.

Napier said that the children have gotten used to the duck and try to take care of her.

She said the children are eager for the eggs to hatch.