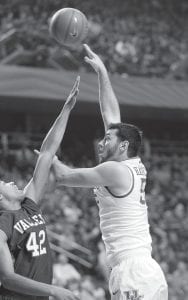 Boston University coach Patrick Chambers meant it as a compliment.

After watching Harrellson do all the little things right in a win over the Terriers last month, Chambers called the 6-foot-10 senior Kentucky’s “mother hen.”

“I love that kid,” Chambers said. “He does everything that you want a center or a big man to do. He plays ball screens great, he rebounds the basketball, he blocks shots. … I really like him. He’s perfect for this team.”

Maybe, but Harrellson would have preferred another term. Rooster perhaps.

Forgive him if he’s still learning how to deal with praise. It’s been awhile. Yet now he finds himself in the role of blue-collar leader for the 13th-ranked Wildcats (8-2), who host Winthrop (5-6) on Wednesday.

His steady play has helped his youth-laden team survive just fine without freshman center Enes Kanter, ruled permanently ineligible by the NCAA for receiving improper benefits while playing for a Turkish club team two years ago. The school is appealing, though coach John Calipari isn’t holding out much hope.

Kanter’s absence left some predicting a slow demise for the already-thin Wildcats. Yet Harrellson has flourished instead, averaging 5.3 points and 9.3 rebounds, second in the Southeastern Conference behind teammate Terrence Jones.

Heady territory for a player who appeared out of his element when Calipari replaced Billy Gillispie in April 2009. Though he knew playing time would be hard to come by as Calipari brought in a cadre of McDonald’s All-Americans, he stuck around thinking the competition would make him a better player.

Still, even Harrellson is taken aback by his recent uptick in production, which included a 14-point, 12-rebound performance in a win over Indiana on Dec. 10.

“He’s a legitimate five who can step out and shoot the ball and does a lot for them,” Hoosiers coach Tom Crean said. “You see how (Calipari) has him out on the floor so much. John knows. He’s a big, big part of their team.”

One that thrives precisely because he doesn’t need the ball in his hands. Save that for heralded teammates like Jones, Brandon Knight and Doron Lamb. Harrellson is only too happy to get in the lane and mix it up.

Does that make him a “garbage” guy? Maybe.

Besides, it’s better than the last time the words Harrellson and “garbage” collided in the same sentence. That was when he vented his frustration with his coach on Twitter following a preseason scrimmage. Calipari called the Wildcats the “worst off ensive rebounding team” in the country without offering Harrellson an “atta boy” for keeping his teammates off the glass.

If he was trying to get Calipari’s attention, it worked. Calipari made him shut down his Twitter account then ordered him to endure extra conditioning every day.

It’s a tactic Calipari says he’s never taken during his career. The sessions put Harrellson in the best shape of his life and forced him to figure out how badly he wanted to play.

Harrellson acknowledges he could have quit rather than endure the punishment. He never considered it, and his progress has proven to be an eye-opener to Calipari.

“It shows you the guys that beat up their players, that mentally and physically beat them up, say they don’t yell anymore, and just beat them up, some players that’s what they need,” Calipari said. “Josh needed that.”

And the Wildcats need Harrellson. The precocious Jones has teased Calipari with his talent but also tormented him by continuing to get in foul trouble and play at times like he’s simply keeping time until he can head to the NBA.

When Jones is on the bench, Harrellson is the only legitimate post player left on the roster. Though he’s still struggling with finishing around the basket, his teammates no longer hesitate to get him the ball. Calipari has urged him to dunk it every time, and he provided a couple of rare highlight plays with back-to-back slams against Indiana.

“The best thing he did was the garbage he Twittered,” Calipari said. “If Josh didn’t Twitter, we would not have done it this way with Josh, and you know what? It would have been a mistake and he wouldn’t be as good as he is right now.”

How good can he become? Calipari says he receives phone calls from NBA scouts who like Harrellson’s size, his motor and his basketball IQ.

“It makes me like, ‘What?’ I talked to (Auburn coach) Tony Barbee and he said, ‘You know that kid’s playing well for you?’” Calipari said. “I mean, I’m like, ‘You’re talking about Josh, right?’”

A lot of people are these days. Harrellson is trying to take it in stride. It’s way too early to get too excited. Still, for a player considered an afterthought for two seasons, it’s nice to be wanted.

“I didn’t even know I’m capable of doing the stuff I’m doing now,” he said. “But you know just hard work and Twitter, I guess it has paid off .”