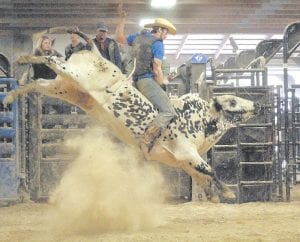 Letcher County rodeo bull rider Rusty Lewis hangs onto the back of a bucking bull in this photo from his Facebook page. Lewis will compete in the annual Isom Days Rodeo this weekend.

And I love my rodeo

There is a popular social media game that asks friends to describe their hometown using only smells.

This weekend in Isom, some of those smells will be popcorn, barbecue, cow manure and saddle leather. The annual Isom Days Rodeo returns Friday night for its 28th year. And one of the bull riders won’t have far to travel to compete.

Rusty Lewis, 25, of Roxana, became a bull rider two years ago and has competed in rodeos all over the eastern United States.

“I’ve been wanting to do it ever since I can remember,” Lewis said this week.

His mother, Belinda “Boo” Lewis of Dry Fork, said he wanted to be a rodeo rider from the first time she took him to the Isom rodeo.

“He is living his dream. I used to take him to Isom, and bought him a rope the first time he went. We went home and he would take my couch cushions and rope them like riding a bull,” she said. “He was hooked at 2 1/2 years old. I had to record rodeos so he could watch them over and over. I can’t tell you how many times I have watched 8 Seconds with him, and he still watches it today.” 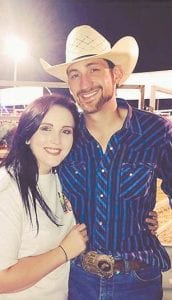 Above, Rusty Lewis and his girlfriend, Tayler Maggard. At left, Lewis, of Roxana, practices his trade in this photo from the Dizney Smoky Mountain Ranch.

Rusty Lewis said he never got to do any actual bull riding until two years ago when he sought out a ranch where riders practice on Sundays, and where they would let him put on a protective vest and helmet and try it for himself.

“You know that first time if you love it or you hate it,” Lewis said, placing himself squarely in the “love it” column. “I only stayed on the bull about 3 seconds that first time, but I rode them five or six times that day.”

He kept practicing and has now ridden in rodeos in Tennessee, Ohio, North Carolina, Virginia and West Virginia, as well as other states. He rode in the Professional Bull Riders Rodeo in Florida this year, but said he didn’t do very well. 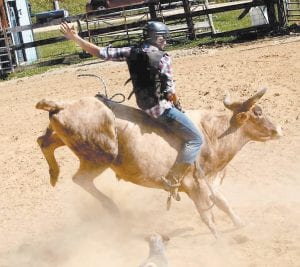 “I froze up,” he said. “That was the biggest crowd I ever rode in front of.”

People might think of the eastern United States as an odd place for rodeos, but Lewis said it’s growing here and becoming more of a mainstream sport. While there was no organized rodeo in Isom until 1991 when the Isom Days Festival Committee brought the first one in, the tiny, unincorporated town has a history as a stock sale where earlier generations often rode bulls for entertainment in the stockyards in the 1940s. While the stock sale closed in the early 1970s, the rodeo was an outgrowth of that history.

Lewis said he always thought the Isom rodeo was small until he started riding the rodeo circuit and saw others in the region.

“Isom is actually a pretty big rodeo,” he said. “It’s probably one of the biggest ones I ride in.”

Lewis said he encourages parents not to be scared, and to let their children try the rodeo when they’re young. He said waiting until he was 23 is the only regret he has. The rodeo has an event in which small children can ride a bucking sheep rather than getting on a bull.

“I never got the chance to do it. My little boy rides them, and he’s 4,” Lewis said. “He started when he was 3 and he loves it. He’s already won a buckle for sheep riding.”