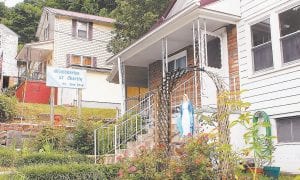 Mother Teresa came from Calcutta, India in June 1982 to announce the opening of the Missionaries of Charity in Jenkins. Three sisters still operate the mission at its headquarters on Cove Road. (Photo by Marcie Crim)

“Our life of poverty is as necessary as the work itself.” — Mother Teresa

On any given day in the City of Jenkins, there are Catholic nuns moving quietly about town in simple Indian saris made of soft white linen with blue borders. In a town of few Catholics, and maybe even fewer people familiar with a sari, this can be a surprising sight.

Glimpses of the Sisters are rare, but they can occasionally be seen at the one gas station in town, the local IGA, or crossing Main Street while walking home after attending mass at St. George Catholic Church.

If you are present for one of the many services held at St. George throughout the week, you can find the nuns smiling at new visitors and kindly offering up page numbers for hymns — and sweetly encouraging the people in the back to please move closer to the front. They have been in Jenkins for three decades, modestly doing good work in the spirit of “Blessed Teresa of Calcutta,” or Mother Teresa as she is known to the world. 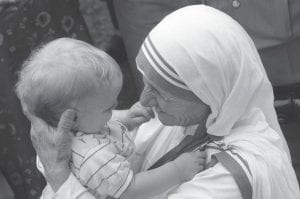 Former Courier-Journal photographer Jay Mather took this iconic photo of Mother Teresa during her visit to Jenkins in June 1982.

Mother Teresa was born in Albania in 1910 and died in 1997 at the age of 87. She claimed that in 1948 Jesus called her to Calcutta, India to help the dying and poor. Through her work in Calcutta she became an international figure of love and faith after being awarded the Nobel Peace Prize in 1979. She also became somewhat of a celebrity, creating friendships with the likes of Princess Di and speaking at the United Nations. She was often invited to the White House and also had the ear of the Pope. In 1999, a poll of Americans ranked her first in Gallup’s List of Most Widely Admired People of the 20th Century.

A high rate of poverty and an already established Catholic church brought Mother Teresa to Jenkins just a little more than 30 years ago, on June 24, 1982. She came to establish a Missionaries of Charity mission in Letcher County — the order’s first in rural America. Missionaries of Charity was established in 1950 and consists of over 4,500 Sisters and is active in 133 countries. Mother Teresa said she created the organization to care for, “the hungry, the naked, the homeless, the crippled, the blind, the lepers, all those people who feel unwanted, unloved, uncared for throughout society, people that have become a burden to society and are shunned by everyone.”

“She was very small and very humble,” recalls Jay Mather, a photographer who documented Mother Teresa’s 1982 visit to Jenkins for Louisville’s Courier-Journal.

“Everywhere she went, she was followed by the other sisters — she was never alone.” Mather said about two to three weeks after his trip to Jenkins he received an autographed copy of the article and photo that appeared in the Courier-Journal. It was signed, “God bless you, Mother Teresa”.

Accounts of the mass that day vary. Some say the service took place inside the church and every pew was filled. Another account has the mass taking place in the parking lot with about 150 people seated in folding chairs. Regardless, many Jenkins residents turned out, as did other folks from the region and from as far away as Alabama and Ohio.

In addition to attending mass and setting up the mission in an old beauty parlor in downtown Jenkins, Mother Teresa spotted an empty house across the road from the mission and expressed a desire to open a shelter for battered women and their children. As late as 1997 the shelter was reportedly active, but when a reporter asked the current pastor of St. George Catholic Church if the shelter was still in operation he said no.

What is still very active is the mission. A member of the convent must adhere to the vows of chastity, poverty, obedience, and the fourth vow, to give “Wholehearted and Free service to the poorest of the poor.” The three Sisters in Jenkins unassumingly go about helping folks in the area. They deliver food baskets to the hungry, sit and pray with the sick, change bandages of the wounded, and are regular visitors to the region’s prisons and hospitals. Living without television, a computer, or access to newspapers, magazines or secular books, their sole focus is on the needs of the community and their personal relationships with God.

When a Mountain Eagle reporter asked to speak with the nuns recently to ask them about their work and the legacy of Mother Teresa, she was told their faith usually prevents them from speaking with the media. The pastor of St. George told the reporter she could ask, but knew they would say no.

A phone call to the Missionaries of Charity in the Bronx, New York — the organization in charge of the Jenkins mission — proved just as fruitless. A pleasant woman who answered the phone there said the Mother Superior was away at a meeting in Costa Rica so there was no way for me to ask for permission. She then added, “But of course we don’t allow the media to take photos or speak to the Sisters. I’m sorry; I will pray for you.”

Mother Teresa visited Jenkins again either once or twice, depending on whom you ask or what information you can find regarding her relationship with Jenkins. She did become close friends with Father Edward Randall, the pastor of St. George Catholic Church from 1980 until his retirement in 2008. She asked him to lead a three-week retreat for her Sisters in Calcutta, India and he accompanied her on various trips when she would visit the United States.

Mother Teresa was a physically small woman — reportedly only 4’10” — with a very large life and legacy. Jenkins is a small town with a big story to tell and Mother Teresa and her Missionaries of Charity are forever a part of that story.