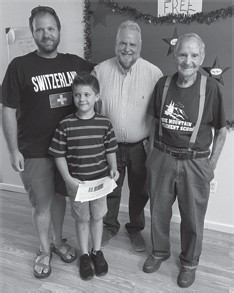 Hello everyone — I hope all are doing fine and dandy. I’ve enjoyed our near daily rains we’ve been having. I haven’t had to water plants all week because Mother Nature has helped me out.

We’ve had hummingbirds flying by the enclosed porch. I have never had a feeder but I may need to get one next year. There was a bird in the tree by the porch that was making a lot of noise. CAT was keeping an eye on that bird. CAT sits on the ledge and stares at the bird.

I did enjoy seeing all of the first day of school pictures. They were full of potential and promises.

I’m sending a Happy Birthday Wish to my daughter-in-law Becky Wenning. Her birthday is on August 11.

My aunt, Ramona Caudill, has given us more produce. We received green beans, corn, and tomatoes. From my cousin, Randy Brown, I got a lot of tomatoes. We appreciate all of the produce.

I had a nice phone call from my aunt, Susan Stamper, during the week. It was great hearing from her. Another aunt, Janice Wolod, sent me a text message. Keeping up with family is so important. 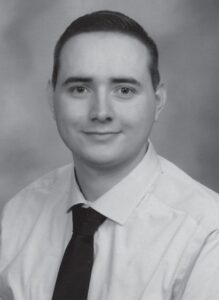 Dr. Matthew S. Little, O.D. was graduated from the Kentucky College of Optometry in Pikeville on May 1. He is the son of Stuart and Janet Little of McRoberts. He is the grandson of the late Lester and Genevieve Little of McRoberts, and the late Arnold and Dana Blair of Jeremiah. He is employed by Big Sandy Healthcare in Pike County.

Randy Brown and Bob Caudill went to the lake for several days of fishing. I haven’t heard how they did but I’m sure they enjoyed the trip.

Kevin and Tina Wenning of Coldwater, Ohio went on vacation with their daughter and her family, Stephanie, Kyle, Will, and Addison Silver also of Coldwater, Ohio. They flew into Denver, Colorado and rented a vehicle. They visited Devil’s Tower and Deadwood, Wyoming for a couple days. They visited historic Deadwood and an old gold mine. They also went to Custer, South Dakota. They visited Mount Rushmore, Custer State Park, Wind Cave National Park, and Badlands National Park. They saw buffalo, wild turkeys, and deer. They enjoyed all of the hiking they were able to do. Their nine-day trip was fun and wonderful.

Spencer Stevenson of Bexley, Ohio was appointed to the U.S. Air Force Academy Class of 2025. He plans to major in civil engineering. Spencer graduated from Basic Cadet Training on August 6, 2021 and his classes began on August 9, 2021.

Spencer wishes to serve his country like his cousin Keith Callahan, who provided support and many answers for him as he went through the application process.

After our son, Mark Wenning, got home from his motorcycle trip to the Ozark Mountains, we found out there had been a motorcycle wreck. Steven Richardson posted something about a wreck on social media and Mike said something to me, so I called Mark at work. Apparently Steve wrecked his motorcycle on a country road about 25 miles from the nearest small town somewhere in Missouri. His motorcycle flipped over and landed in a ditch. Mark saw the wreck and got to him right away. Steve was having a hard time breathing and Mark didn’t want to move his head but he had to help Steve breathe. Steve was unconscious when Mark got to him, then he came to for two minutes, and passed out again. The other motorcyclist, Denver, showed up and Mark had him call 9-1- 1. They were told it would be 30 minutes before an ambulance could get there.

Four cars went by and three stopped but didn’t have any medical experience. A police officer finally stopped but he didn’t know what to do beyond what they were doing. Finally an ambulance arrived and the state police. Steve was transported to a local hospital and then airlifted to St. Louis, Missouri.

Mark said they were trying to figure out where Steve was transported to when the state trooper said he would find out for them. Mark’s riding gloves and jeans were covered in blood with the 98 degree sun.

Steve had a broken finger, broken nose, several broken vertebrae, and a concussion. He was in the hospital for three days. His family drove to St. Louis to be with Steve. Mark said he was going to tell us but didn’t want to tell us while he was on the trip. Thankfully Steve survived but I did tell him to wear a helmet from now on.

John Campbell has killed two copperheads. On Thursday one was at the shed where he keeps his lawnmower and on Sunday one was by his porch.

We went for a drive on Sunday and I finally found The General Store. It was closer to the Harlan County line than I expected. Now that it’s found, I want to go in to the store.

Our cat named CAT was sitting on the porch ledge watching a fly and then he started stalking the fly. CAT missed his footing and slipped off the ledge. He tried to catch himself, but he slipped into the trash can and knocked it over. CAT was embarrassed and I tried not to laugh. CAT is getting too big for ledge stalking.

We came home from my brother’s house and realized we had left a loaf of bread on the table. While we were gone, CAT had ripped open the loaf of bread and ate some. Now bread is on my grocery list.

This week’s quote is attributed to Hans Hansen: “It takes nothing to join the crowd. It takes everything to stand alone.”

If you have any mail, please email CowanNews@aol.com. Thanks.

Have a good week and stay safe. With all of the COVID, it’s time to use masks again.