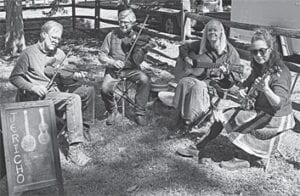 Hello everyone! Are you enjoying this wonderful summer weather? At least it is beautiful in the Ohio Valley and surrounding areas. It can stay this way until next spring as far as I am concerned.

You might say I’ve been on the road again. Except this time it was a planned event. I spent the weekend at Renfro Valley, at the Kentucky Music Hall of Fame.

Dale Farmer had a soundtrack CD made of the music from the Mountain Minor movie, then Dale was host to a CD release party, which was great. Several of the ones who were in the movie attended the party. It was such a pleasure to meet the two young kids, Hazel Palsey and Asa Nelson, who are such wonderful young ones to talk to. Now they are teenagers.

Hazel and Asa are great musicians, who never met until the Mountain Minor movie, neither had ever acted in anything before. These two have such loving parents to support them. Hazel has siblings that are musicians. I enjoyed spending a time with Warren and Judy Waldron, Dale Farmer, Amy Coogan Clay, and Ma Crow.

After the performance everyone was going to eat at a Mexican restaurant; of course I declined. Afterwards they were going back to their motel to play music. I was tempted to go, however the motel they were staying was another exit from me and I didn’t feel like driving. Baymont Inn was close enough to Kentucky Music Hall of Fame that I could have walked.

Of course Thursday I started having issues with my stomach. Friday I really didn’t feel like even planning on going. Renfro Valley is only a two-hour drive. Friday morning I did grab a few things and set out on my way. About halfway there I knew I had made a mistake. I stopped for a little while then went on my way.

I checked into the Baymont Inn and never moved out of my room until a couple of hours later. I remember several years ago when I used to go to Renfro Valley and different places, there were a lot of restaurants in the area. I did go to McDonald’s for tea, then back to my room and didn’t budge until Saturday morning.

I had planned on going driving through Livingston and backtracking to Berea, and different places, to no avail.

Renfro Valley is a ghost town, due to the coronavirus and other things. It is absolutely heartbreaking to see all these beautiful buildings sitting empty. You can almost hear the music as you walk past the barn dance building that was so active for so many years. The last time I was there was to see a Christmas show that was held every year.

My first time at Renfro Valley was to see Loretta Lynn, so many years ago, I have forgotten how long. Then the last time that I saw Loretta Lynn I was sort of disappointed as she didn’t wear her beautiful long dresses, she had switched to nice pants. Loretta Lynn did a fantastic show, it just didn’t seem right to me, “my opinion”.

Although I spent quite a bit of time in a beautiful motel room instead of out sightseeing, I am glad I attended the sound track release party. I have traveled quite a bit, stayed at several motels. Baymont Inn is the most beautiful motel I’ve ever stayed at.

You might say I’ve sort of lived on the wild side this week, as Tuesday my daughter Kay and I went to Panera Bread, the only place I seem to be able to find soup with a flavor that doesn’t hurt me too bad. Afterwards Kay put the top down on her 2005 Cadillac, which I enjoyed immensely. Here it is November and we are riding in a convertible.

Hello to Les and Pat Wagner, I hope they got to do something on their anniversary Nov. 3.

Mike and Marcia Caudill, I thought I was going to be in the mountains before winter. As of now I am beginning to doubt that very much. The marshmallows and the campfire will just have to happen without me. Just think of me as you are enjoying them.

Please keep Johnny and Ann Calihan in your prayers as they are going through a difficult time.

I am sorry, this is going to be the shortest column that I might have ever written, as of right now I am really too sick to concentrate.

Welcome to our new President Joe Biden, too bad Mitch McConnell will make a few more million dollars, while Kentucky suffers under his power.