Mountain Minor was enjoyed by all 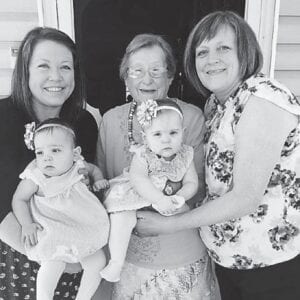 FOUR GENERATIONS — Ann Calihan is shown with her daughter Sue Wagner, granddaughter Ashley Baker, and twins Claire and Olivia. This is an older picture. Claire and Oliva just celebrated being two years old.

Hello everyone and Merry Christmas in July!

As I start this column the air has a sultry feeling to it. The fog is very dense in the low part of the Ohio Valley area as we live close to the river.

How is everyone doing in these hot days of summer? Oh what I would give for the serenity of a peaceful clean creek or shallow river like that which was around the small place that I grew up known as Roxana, for my grandkids that are young enough to enjoy it.

If truth be known, even back in the day it probably wasn’t all that pure. We were so innocent we didn’t take time to think that somewhere upstream there may be an old outhouse, which we called a toilet, sitting close to the creek.

The same way with breaking an icicle off the cliffs by the road in the wintertime. The innocence of being young.

The thought never occurred to us that in the clear crystal stream a dead animal could be lying. Oh well, I didn’t get sick, and I don’t believe any other child did either. 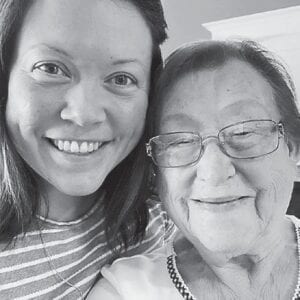 With this extreme heat, it makes me think back to growing up in the mountains of eastern Kentucky. I’m sure several can relate. We didn’t know anything like air conditioning existed, and we never had a fan either. Mommy would open the windows and doors, though we didn’t have screens. The children played under shade trees and invented our own entertainment.

Since I was the oldest it seemed every step I made I had two shadows that followed me, except these shadows weren’t mine. My brother Wallace Lee and my sister Loretta would be at my heels as quick as they were big enough to walk. There are times I would sneak off and walk around the hill there at Roxana, just to be alone, and to watch other people as they would go about their business.

Sometimes my niece Sue Hall and I have conversations. Sue has never liked to be alone, and if she can manage it, she will always have someone with her, and the more the merrier. Sue simply doesn’t seem to comprehend what I am talking about when I say I love being alone and that I have always been like this. Especially when she knows how much I love people and dancing. 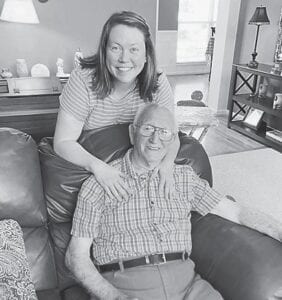 During the weekend I was in the mountains I call home in June, Sue was at loose ends as she was alone. We spent Saturday and Sunday together going places. I must say it was very enjoyable just the two of us.

My son Keith Ballard has lived with me over two years, even though we are in the same house you would be surprised how little of time we spend together. Keith gets up early of the morning, and he isn’t a morning person so we have no conversation. Keith will sit on the back deck drinking coffee, smoking a cigarette, and enjoy watching the hummingbirds and birds.

There are times you will find me on the front porch. If it is chilly as sometimes it is, you will find me snuggled with a cover on the swing enjoying the birds as they come to the birdfeeder for breakfast.

Actually I guess I am weird. Oh well as long as I am happy, and that is what counts. 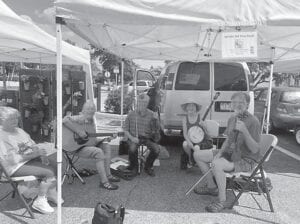 “We’ve been having a big time playing again at the Oxford Farmers Market Uptown. A big thank you to our dear friend Rose Ballard for bringing us the face shields to replace those hot, hard to breathe in, impossible to sing in cloth facemasks,” said members of Jericho Old Time Band. “We’re there every Saturday morning from 10 a.m. to 12 p.m. so come on out and buy some good food and say hi. It’s a really nice market and folks are wearing masks and distancing very well.”

The movie of Mountain Minor previewed on KET. It was really enjoyed by everyone who watched it from what I’ve been told. As the time for the movie got closer I called Ann Calihan to see if she could get KET, since we have different cable companies. Ann really enjoyed the movie and the music, as she kept her foot busy tapping to the music.

I realize I’ve written a lot about the Mountain Minor movie. A few may even get tired of hearing about it or wonder why it means so much to me. If I can sort out things in my sometimes nimble brain, I will try to explain to some detail.

I remember as a child how Mom would recall her growing-up years on Big Branch, not far from Roxana. My grandma Rosa Hall was still actually living in some of the times that are in Mountain Minor.

Mommy and Grandma both were using the tub and washboard to do laundry when I was young. Even at the age of about seven years old I attempted to wash clothes on the board while Mommy went around the hill to tend to her garden, while Wallace Lee, Loretta and Jerry were asleep.

Since it was just a short distance Mom trusted me enough to leave me with three younger ones. What she never thought I would do, was the washing! I had seen Mommy turn the wooden chair upside down and place the washtub on the chair. I managed to carry water from the ever-flowing spring beside the house, pour water in the tub, and proceeded to wash Jerry Allen’s diapers.

Thank God I didn’t attempt to somehow build a fire like Mommy would do and heat the water. Yes, I washed the diapers in cold water. Mom said the first thing she saw as she came into view of the house was a clothesline full of diapers hanging.

Mom checked the diapers for stains, and to make sure they were rinsed, and the second thing she did was scold me.

There’s so much in the movie that I can relate to. Not only that I lived through some of it, but that it was also instilled in me from Mommy and grandma Rosa Hall talking about their lives.

Saturday, I ventured again to the Farmers’ Market at Oxford, which is 40 miles one way for me. Jericho Old Time Band, which consists of Warren and Judy Waldron, Dale Farmer and Amy Coogan Clay, performs there each Saturday from 10-12.

This time I had a couple of surprises in store for me as well. Beverly Halcomb, a daughter of Mary Whitaker and Bill Halcomb, formerly of the Kingscreek, Roxana area, has called Hamilton, home for many years. Beverly enjoyed the music very much. It was so good to see her as it has been sometime since we have gotten together

Mary is the daughter of my little mountain mama Alma Whitaker, who used to write for The Mountain Eagle newspaper. Friday night Beverly enjoyed the Mountain Minor movie very much. Bill and Mary along with a few others were enjoying being at their old home place in the mountains.

Jeffry and Debbie Lyons also came to listen to Jericho Old Time Band and to see me.

Thanks to Nina Craft, for sending me a pack of lettuce seed; now I have a small bowl of lettuce. It isn’t Black Seeded Simpson, but it is still beautiful. Keith drilled holes in a wheelbarrow that he wasn’t using, so I put potting soil in it.

There’s not as much that came up as I would like since it has been so hot, but I have enough that I can fix some wilted lettuce and onions with hot bacon grease and not have to imagine what it tastes like, with my mouth-watering. Yes I am going to take a couple of bites.

Nina Craft will never know how much I appreciate her kindness, to be that thoughtful to enclose a package of lettuce seed in a card for me. That is one reason I made sure that Annette Akers got a couple of packages of Black Seeded Simpson seeds when she told me that she couldn’t find it for a late bed of lettuce.

Annette and Russ were kind enough to share a package of sugar peas like Mommy raised when I was a child, plus a huge bag of corn.

Nina Craft has the most beautiful handwriting that I have seen in many of a year. I’ve always admired Marcia Caudill’s writing. Marcia is a retired teacher and writes so precisely. My long ago friend Will Mae Boggs was another one that had such beautiful writing. I still have the cards and letters that Willa Mae sent to me.

Willa Mae was married to Carl Boggs. Hello Carl, if you are reading this. I really miss seeing you.

Hello Les and Pat Wagner, and to the extended family.

Hello Mike and Marcia Caudill. I hope God will spare me another year, and maybe Campbell’s Branch and Carcassonne Community Centers will open next year.

Hello Buddy and Bernice Grubb. Chuck Grubbs, the face shields were a hit with everyone, and thanks to Bernice for sending them

I am so tired of hearing about coronavirus. I wonder if it will magically disappear after the election? Oh I believe the virus is very real, and there are times I do believe it is blown out of proportion!

I don’t understand how come it is so important to wear a mask to do your everyday life things, yet protesters by the hundreds never have a mask on. The same way about churches being closed, but abortion clinics and liquor stores are considered essential?

I think our government should get its priorities in the right perspective. Election is going to roll around before you can bat your eye. Come on, Kentucky, ditch that lie bag Mitch McConnell.

Once again, I think I am down to seven or eight copies of the Beauty of A Rose. $15 and $6 shipping. I am not going to have any more reprinted.