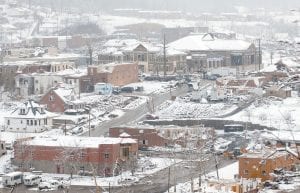 Snow fell on West Liberty in Morgan County on Monday as the town of 3,400 was trying to clean up from the March 2 tornado. The Category EF-3 tornado, the town’s second in 3 days, had winds of up to 140 m.p.h., and was on the ground for about 60 continuous miles in eastern Kentucky. (AP Photo)

Killer tornadoes, including one which stayed on the ground for at least 60 miles after touching down in the town of West Liberty, swept through parts of eastern Kentucky on March 2. At least 15 people died of storm-related injuries in Johnson, Laurel, Lawrence, Morgan, and Menifee counties. 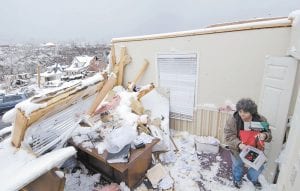 Rhonda Dixon cleared out records and other items from the Morgan County Home Health Agency. The tornado that hit West Liberty last Friday tore off the roof and back walls to the clinic. (AP Photo/John Flavell) 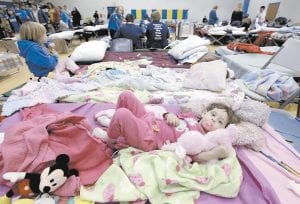 Mike Caudill, CEO of Whitesburg-based Mountain Comprehensive Health Corporation, took this photo of a hillside near Salyersville in Magoffin County after delivering a van load of water donated by MCHC to nearby West Liberty. 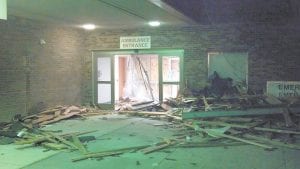 Whitesburg city employee Chris Caudill took this photo showing damages to the Appalachian Regional Hospital in West Liberty while he was there volunteering his help the night after the second tornado hit. 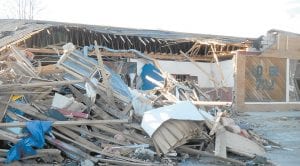 Mike Caudill, CEO of MCHC, shot this photo of the ruins of Woodman of the World Lodge 722 in West Liberty. The building housing the lodge was destroyed on Feb. 29, when the first of two tornadoes, this one a Category EF-2 with 125 mile per hour winds, hit Morgan County.