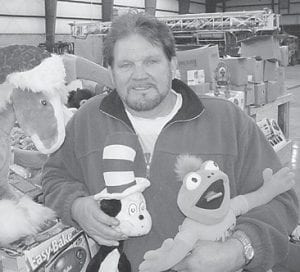 In 1976 Marlow Tackett was doing well in the entertainment business. He had hit records on the country music charts and his Country Palace in Pike County was the premier entertainment venue in eastern Kentucky.

Marlow learned very early in his career that the best way to succeed in the entertainment business was to make one’s self visible to the public at every opportunity.

“I have literally done thousands of benefit shows and I have never charged for them,” said Tackett. “That has always been my way of giving back to the people who made me successful. It was, as the result of one of those benefit shows in 1976, that a little girl sent me a letter requesting some help in making a nice Christmas for her family. I was so touched by her simple request that I decided to do something special for her and her family.

“That Christmas was as rewarding for me as it was for her. I was reared in a family of 18 kids and we never had a lot of worldly goods. Even though my dad worked two jobs, life was still tough. I recalled that as a kid at Christmas we were lucky to get some fruit, nuts and candy, and maybe a small toy for the younger kids. I remember the last toy I got for Christmas was a little plastic pistol, not a cap buster, just a plastic pistol that clicked when you pulled the trigger.

“After I met that little girl’s family I realized that my childhood was not too bad by comparison,” continued Tackett. “I guess if you look around you can always find someone who is needier than yourself. That event made me realize that there were probably many families like hers living in poverty that needed help.

“That was the beginning of the annual Marlow’s Christmas for the Needy. The next year I held an event at my Country Palace and served 450 families. The program has run continuously and grown each year since its inception in 1977. Since I closed the Country Palace a few years ago I have had to find other venues that were big enough to serve approximately 7,000 people each Christmas. Last year I held it in Floyd County.

“I have been trying for several years to find a place in Letcher County that is big enough, and this year I finally found it at the Gateway Business Park in Jenkins. Thanks to Mr. Leo Kaye who has been gracious enough to let me use the building formerly occupied by Driller L.L.C. There is at least 20,000 square feet of floor space and parking for hundreds of vehicles.

“I am enlisting all of the help I can get,” Tackett said. “In the past I have gotten help from local businesses, schools, private citizens, churches, public officials and civic clubs. Last year I received and distributed eight tractor trailer loads of toys, food, clothing, home furnishings and appliances. Much of the goods come from North Carolina, Tennessee, and Virginia, and of course some is donated locally.

“It takes a lot of volunteers to help sort out the items and help people get what they need. The program will not only service Letcher County and the surrounding counties, but some people come from Virginia and West Virginia. The only pay is the gratification you get when you see the smiles of the children and their families that you serve.”

Marlow’s Christmas for the Needy has brought him national acclaim for his humanitarian work. To many families he is known affectionately as The Mountain Santa Claus.

The items most needed are: toys, clothing, nonperishable food items, candy, fruit, household supplies and home furnishings. The program will begin on Sunday, Dec. 20, and continue for days or weeks until everything is given away.

Saturday, Dec. 19, there will be live gospel and Christmas music at the site free to the public, and everyone is invited.