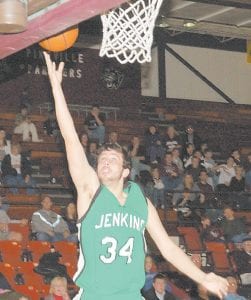 UP FOR TWO – Jenkins senior Josh Potter laid in a basket for two points during the Cavaliers’ 72-55 loss to Pikeville last week. (Photo by Chris Anderson)

Mountain high school basketball is back.

Yes, that’s right, you can write it down. I’m convinced after watching teams like Paintsville, Shelby Valley, Elliott County, Hazard, June Buchanan, and Corbin along with several other teams in the 13th Region over the last two months battle some of the Commonwealth’s top teams down to the wire and winning a few, that happy days are here again come March Madness this year.

I’m not only talking about district and regional tournament play across eastern Kentucky either. I’m talking about some of our teams going to Rupp Arena and making some noise all the way into Saturday morning’s semi-final round. What’s really exciting to me is that the teams I’ve listed so far have their best players coming back for another year and in some cases two more years.

After winning collectively only three games the last eight years and being somewhat embarrassed in some instances in the Sweet Sixteen, the 13th, 14th, 15th and 16th Region champions in 2008 can really make amends for all of us if any of those regions’ co-favorites can keep from getting upset in their respective districts and regions.

The 13th Region doesn’t have two elite teams like the 14th, 15th, and 16th Regions do, but it may be the most competitive region in the mountains with as many as five teams that could win the region and make a strong showing in Rupp Arena. Corbin may have the best duo to build around with 6’5″ junior Josh Crawford and 6’3″ sophomore Madison Johnson leading the Redhound attack, but Class A powerhouses Cumberland and Pineville won’t buckle under to anybody. And let’s not forget about the ole wily veteran down at South Laurel, Steve Wright, who has a big 6’7″ sophomore center in Matt St. John to go to in those tough late game situations during tournament play.

The best individual player in the 13th Region, or for that matter maybe the mountains, doesn’t play for any of the teams I’ve mentioned and that is 6’5 1/2″ wing forward Cody Miller of Knox Central.

Don’t forget the folks over in Manchester, either. Coach Kevin Spurlock is building a solid nucleus for the future this year playing several freshmen and sophomores in his rotation, but they are led by their lone senior starter in 6’3″ all-purpose player Justin Hobbs.

• According to Owsley County Principal Teresa Barrett, the Lady Owls’ former hoops coach, who resigned abruptly a few weeks ago, did not quit due to lack of support from the administration and community but from complications due to diabetes and other health reasons and she was somewhat shocked to read in this column that those reasons were given. If your reasons are accurate, Ms. Barrett, I stand corrected, but we were just reporting what we were told by fans who were in attendance at a boys’ game we were at earlier in the season.

• According to school officials at both Hazard and PCC, Eric Back, the 5’10” freshman point guard who transferred from Perry Central to Hazard during the semester break, has been ruled ineligible to participate in interscholastic athletics sponsored by the KHSAA for one calendar year. Back and his parents or Hazard High School can appeal this ruling, but the appeals process usually is time consuming. If Back’s ruling isn’t reversed he will miss the second semester of this basketball season and first semester of next basketball season as well as the entire 2008 football season if he remains at Hazard. Back was the starting point guard at the time of his transfer and is one of the brighter stars on the rise in football as a wide receiver, defensive back and return specialist.

• If there was ever any question about how important sophomore guard Tate Cox was to June Buchanan, it’s been answered the last three weeks. Cox went down in the final minutes of the WYMT Mountain Classic when JBS beat Hazard. The last three weeks JBS has lost to Hazard in the finals of the 14th Region All A Classic, PCC at the John C. Combs Arena, and at Cordia with Cox just last week getting back on the floor. Look for JBS to right the ship when Cox gets his legs back just in time for the postseason.

• According to sources close to Tri State Sports Services Inc., a member of Billy Gillispie’s staff is going to take a look at Paintsville star senior 6’3″ Landon Sloan in the next two weeks or during tournament play. Also, Gillispie himself reportedly liked the game of Hazard’s 5’10” sophomore Josh Whitaker when evaluating super senior Scotty Hopson at last week’s Sweet 16 All A Classic state tourney. Gillispie also stated that Whitaker needs to grow a couple inches in the next two years to merit serious consideration for play at top-level Division 1 schools, but you could say the foot is in the door. Contact has been made and the evaluation process has begun and that’s a lot for a mountain player in modern day athletics.

• The inaugural Whitaker Bank Mountain Coaches vs. Cancer Classic is in the books and event organizers say it was a success. With Whitaker Bank of Perry County and the Whitesburg Whitaker Bank underwriting the expenses of the event, 100 percent of the gate receipts will be donated to the Jimmy V. Cancer Foundation. According to cogame directors Ira D. and Harold A. Combs ,$2,005 came through the turnstiles at Whitaker Athletic Center for the triple-header games between Estill County and Cordia, Breathitt County and Cumberland, Buckhorn and Knott Central. Organizers will announce in the next two weeks if this will become an annual event for the Jimmy V. Cancer Foundation.

• In this crazy world of high school hoops don’t count out little Cordia High from the Lotts Creek section of Knott County as a player in the 14th Region tournament next month. Already on the Lions’ resume this season are wins against PCC, JBS, and Estill County. The Lions are presently 16-7 and have an interesting game with Hazard at home on Feb. 19 to end regular season play.