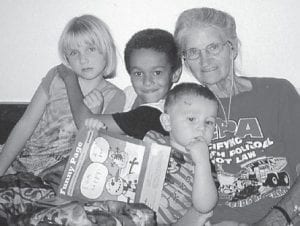 Loretta Lucas Blair is pictured with her grandchildren, Hanny, Nathan and Bill.

October is gone like the wind, so the leaves will soon be gone and trees are going be bare for a long time as winter is not creeping but racing to get here.

Halloween was a disaster around the local areas as the witches must have brewed up a wicked storm to go with the time. There was lots of damage due to the high winds, tornado warnings were given. I put a flashlight close just in case the electricity went off, then curled up on the couch and fell asleep.

My daughter Angie Wiederhold took my little sidekick Bennie to Northgate Mall for trick or treat as it was raining and so nasty. Angie and Bennie have both been very sick and really shouldn’t have attempted being out in the dampness. I was going to go help her with him and was chilling so I stayed home like a big chicken.

November came in with such a force, it makes me wonder what are we in for. I will gripe for the millionth time, I hate cold weather! It seems the older I get the more I hate it, although I have never been fond of freezing.

As I was reading through posts in Letcher County Genealogy, something sure brought back childhood memories as I read of a young woman named Martha Bates slapping a preacher for calling women who had bobbed hair bad women. Evidently Martha Bates was put in jail. From the article women banned together to get Martha Bates released from jail. I don’t blame Martha, she should have slapped him.

While reading the article I laughed in privacy of my own home as it brought so many memories when I attended church with Minnie Whitaker. Martha Mitchell cut her long hair, and the preacher announced she was going to be thrown out of the church. I made sure to go to church several Sundays with Minnie as I thought they would literally throw Martha out bodily. I was probably nine or 10 years old at the time.

It seems as if I wasn’t the only one who had this impression as they heard the term “throw someone out of church” as a young child! With today’s dress code any type of apparel is acceptable, plus hairstyles and even make-up that wasn’t permissible. Can you imagine someone being thrown out of church today?

The longing for the mountains somehow got the best of me, plus knowing in a month or so snow will be falling and I won’t travel during that kind of weather. Saturday afternoon, somehow my feet took over and started doing my thinking. I walked into the bathroom to start a load of laundry, actually threw clothes in the washer. I picked up a long sleeve shirt, a clean pair of jeans, my medicine I need, put them in a bag, grabbed a pair of flats. I completely forgot to take water and a Coke for traveling and out the door. I left dirty dishes in the sink too!

To beat it all, I forgot I only had about $25 cash with me. I had money in my checking account, a full tank of gas and I was out of here and was in the mountains at 4:45. I sat in Kingdom Come Community Center parking lot and brushed my hair and changed shoes. It was beautiful weather to travel.

I was there in time for the music. My sister-in-law Wanda Hall said she looked into the room, was very surprised as there I was as no one knew I was coming. Wanda was so busy helping the kids in the Haunted House, and even took a turn lying in a casket.

If dancing doesn’t kill me, then curiosity will. I went through the Haunted House part, walked out back of the school and the doors locked on me. I started to walk around the school. I tripped over a branch, I fell in a ditch and the wet grass and lost my shoes, both knees are bruised. Thanks to a couple of young boys who came outside and helped me find one of my shoes. At least they didn’t see me fall!

Jerry said he thought I got drunk and fell. Thanks, Mattie, for washing my jeans.

I hadn’t even thought enough ahead of a place to stay. Wanda asked me to spend the night with her, but I decided to go stay at my brother Jerry and Mattie Hall’s as Jerry isn’t doing too well.

I met a woman named Rosetta Kaiser, we danced several times and of course I had a great time.

Sunrise Ridge did a great job, Shawn Stamper and Jack Adams did a double as they picked with Back Roads.

I wasn’t the only one who decided to go to the mountains. Green Calihan and family members were down at the same time that I was.

Sunday morning was very difficult for me as I awoke at my usual time of 5:00, which really was only 4:00 since the time changed. I couldn’t go back to sleep, didn’t want to turn the television on as not to disturb Jerry and Mattie. I really thought about getting dressed and heading back to Ohio. I finally did turn on the television volume real low, got some of Mattie’s paper and wrote until I felt sleepy again.

Finally as daylight came I wrapped a blanket around me, sat on the porch and called my daughter Kay Gray in Destin, Fla. I know she is like her mother, up at the crack of dawn.

I left Whitesburg about 11:00 and got home about 4:00. I would have been home much quicker except I started feeling bad and pulled over at the Natural Bridge rest area and slept for almost an hour.

I looked at the clock at the time Anna was born. So many thoughts came cascading through. In 1948 Mom had a baby girl named Anna Lou, and she died Nov. 3..

Belated happy anniversary to Les and Pat Wagner Nov. 3. I know they had a quiet but happy time just being together.

Hello Larry and Becky Hasty and Polly and Kelly. I will be seeing you before to long at Hunters Pizzeria.

Belated happy birthday to Shirley Wells Oct. 29. Shirley spent a few days in the Smoky Mountains. I’m sure Shirley had a great time.

Hello Carrie Bates, who is Jerry and Mattie’s neighbor.

Oma Hatton, I really wanted to come by to see you Sunday morning, however I knew you would be getting ready for church.

Billy, had I known your telephone number, I might have called just to wake you up.

Jon Caudill, I missed you and Libby too. Darlene Campbell, it was great to see you dancing.

Bev and Jeff Adams, it was really good seeing you again, and you know I must love that kid, Jack, to drive that far to hear Sunrise Ridge.

It is time to get this on its way. Until next time.