Mouse finds its way into car 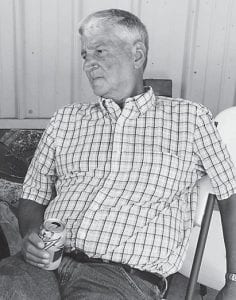 What would you do if you were driving along on your way to take your grandkids to school and one of them yelled, “Granny, there’s a mouse in the car!” Well, believe it or not I kept my cool and didn’t mess on myself or scream or anything crazy.

I kept driving until I pulled into Martha Jane Potter Elementary parking lot and then I lost it. But, I have to tell you it wasn’t on the inside of the car it was on the outside in the track where the windshield wipers lay. It would poke its head out and then come on out onto the wipers and just look inside at us and then it would go back down under the hood. Seconds later here it would come again and it did this about six or seven times.

My grandson Seth checked under the hood and couldn’t find it. Honestly though, he just raised the hood and looked for about five seconds and then said, “I don’t see it anywhere, but it looks like it might have a nest of leaves.”

Well, the whole time I drove the rest of the day I was checking to see if it was inside with me. I don’t know what I would have done if I had seen it. Then that evening I told my husband and asked him if it could get inside the car and he assured me it couldn’t. So, I felt much better about it. 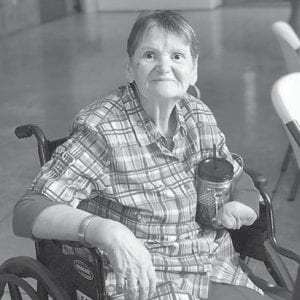 The next time I drove I went to chew a piece of bubblegum that I had in the cup holder and lo and behold the paper on it had been chewed and the gum was exposed and scratched. I went to Mom’s and took the gum in to show my husband that he was wrong. (I have to admit he isn’t wrong very often so when he is I have to call him on it.)

He was mowing Mom’s yard so I laid it on the cabinet and waited until he finished. When he finished mowing I said, “Hey Yonts, you know how you said that mouse couldn’t get inside the car? Well, I have something to show you.” I went inside to get the gum and I couldn’t find it anywhere. I went back out and said, “Well, I could’ve sworn I brought that gum in out of the car.” Charlene was standing there and she pulled a piece of gum out of her mouth and said, “ YOU MEAN THIS GUM THAT I’M CHEWING?” 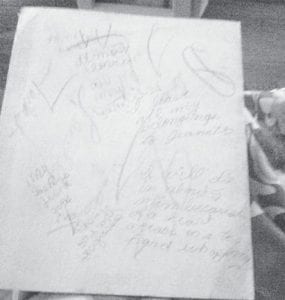 Delores Tacket Holbrook’s last will and testament — in case you can’t read this it says “I almost loved all my family. I leave all my belongings to Jeanette. My Sears junk goes to the one with glasses. I am going to die in 5 min. because of a heart attack or a too hard whopping.”

Then the next day I went to get a napkin out of the glove box and all of them had been chewed on. I told Estel Taylor about it at Letcher County Senior Citizens and he told me a tale of a time he had with a cat under his hood. He said one cold morning he went out to his car and when he started it he heard the awfullest meow ever. And a cat jumped out from under his car with its tail ripped off. He said he sure hated that he had done that.

But, Debbie Baker told me I better get the mouse out of the car because it would chew my wires into and eat my padding out of seats. So, we set mousetraps in the car that night and didn’t catch anything. I just hope it left. Oh, yeah I forgot, my animalloving granddaughter, Drew Eden, wanted to get the mouse out that morning and save it for a pet.

We’ve been working on one of Mom’s bedrooms. We’re cleaning out all her quilting material and such. I found a box of cards and such under her bed. In it I found a jewel and a half. It was a Bible School award that belonged to my baby sister, Delores Tacket Holbrook. It was signed by Mr. Patterson. I remember them so good. They had a daughter named Hope that was autistic. They were a husband and wife that traveled around during the summers and found empty houses or churches to hold Bible School for the week. They held it in Mom and Dad’s empty rental house.

Well, the award itself was a jewel. Because I had been thinking about Bible School memories for the past month or so, but the thing that tickled me the most about this award was what Delores had written on the back of it. She had written what appears to be her last will and testament. I’ll include a picture of it. Needless to say, she was as witty then as she is now.

Another jewel I found was a box full of VHS tapes of our family get-togethers. Videos of Mommy telling stories about growing up in Marlowe. One of the stories that we recorded was her telling about what they used to say to remove a sty from their eye. They would say, “Sty, sty on my eye pass off to the next one that passes by.” And if that wasn’t mean enough, she quoted another little saying to one of her good friends and that friend, Norma Jean Halcomb, went to the teacher and repeated it. It went like this, “A nickel and dime makes fifteen cents, did you ever see a school teacher that had any sense?”

I guess you can figure Mommy got in big trouble with that teacher. She said she sure wouldn’t have told Norma Jean that if she had known she was going to repeat it to the teacher.

Speaking of Marlowe, I had a really good conversation with my cousin Pearl Adams Banks and her husband Doug Banks at our Pennington Adams reunion this past weekend. I was talking to him about a lot of the people from Marlowe and he asked me if I knew there was a cemetery way up in Marlowe. He said it was past what someone had told him was the “Salthouse”. But, when I asked Mom about it she said it was the “Sandhouse”. She said they kept sand in there to put on the railroad tracks. Doug said there was only one grave with a tombstone and it was a baby with the last name of Page. Well, I messaged Bertha Dye and she said it was her baby sister, Esteline Page. She said she bought the tombstone and Wid Page is the one that had it placed.

It was so good to see my cousins Saturday. The oldest girl, Shirley Adams Sands, and her brother Jack Randall Adams were chopping firewood and Shirley was laying the wood and Jack was chopping it and he accidentally chopped off her arm. I loved to watch her use that arm when we would visit them. She held a spoon in it and everything. Her sisters Faye, Pearl, and Helen Sue were all there and their brother Larry Joe Adams. I wish we had had more time to just set and reminiscence.

Well, another week’s column is finished and so I will end once again asking everyone to remember to pray for all those who have lost loved ones especially my pastor, Bill Jones, and his wife Sandy.

Also, remember Oma’s weekly plea, try your best to be in church Sunday. If your church has services Sunday night or throughout the week, you know where you should be? Right where God wants you.