Movie filmed in E.Ky. will be screened here Sunday 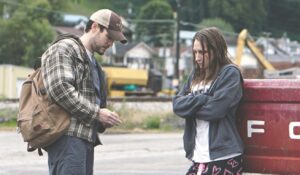 MOVIE TO BE SCREENED HERE — Philip Ettinger (left) plays Cole Freeman, a nursing home employee buying prescription drugs from elderly neighbors to resell, in “The Evening Hour.” Above, Cole (Ettinger) makes a deal with Charlotte Carson (Stacy Martin) in a scene from the movie. The film was shot in Harlan and Letcher counties. It will show in Appalshop’s Solar Pavilion at 7 p.m. Sunday, Aug. 29. Director Braden King will take questions after the movie. (Film photo.)

Letcher County will get a peek at the latest motion picture to be filmed here this Sunday night when director Braden King arrives for a screening of “The Evening Hour” in Whitesburg.

Shot in 2018 in Harlan and along Pine Mountain in Letcher County, “The Evening Hour” is the story of West Virginia nursing home aide Cole Freeman (Philip Ettinger), who buys pain pills from elderly neighbors and sells them to support himself and the good deeds he does in his community. He has made an uneasy truce with local drug kingpin Everitt (Mark Menchaca), who tolerates his small-time peddling. All that is upended when Freeman’s estranged mother (Lili Taylor), a recovering addict, and old high school friend Terry Rose (Cosmo Jarvis) both return to town, with Rose hoping he can get Freeman to go big with the drug business.

The movie includes cast and crew from around the area. Robert Gipe, a former member of Appalshop and now an author and teacher at Southeast Kentucky Community and Technical College, was an associate producer on the film. Frank Hoyt Taylor, a Norton, Va., native and former member of Roadside Theater, plays Clyde Freeman in the film.

Though it is set in West Virginia,

King said several factors convinced him to shoot here, including the beauty of the views from Pine Mountain and the state’s film incentive.

“West Virginia got rid of its film tax incentive, but Kentucky still had theirs. There was no way we could have made that film without that,” he said.

King said the value is hard to estimate, but that the film cost somewhere between $2 million and $2.5 million by the time the incentive was added in.

“We certainly, I think, made a film that looks like many multiples of that,” King said.

King scouted the area for about two years prior to filming, and said it seemed “like a community that was open to making a movie.”

He laughed when asked if he had seen the film “Stranger with a Camera”, an Appalshop documentary about a Canadian filmmaker who was shot and killed by a Letcher County landlord in 1967.

“ I am familiar wi th ‘Stranger with a Camera’,” he said. “I’ve shot films in the Aleutian Islands, and in Armenia. For the most part, I think people are people.”

King said he was aware of the sensitivity in the area to film portrayals of people in Appalachia, and was somewhat apprehensive when he brought an unfinished cut of the film back to Harlan for a viewing. He said he tried to be respectful of the area, but that is up to people here to decide if he was successful.

“What I can tell you is we did bring the film back for a feedback screening in Harlan before it was finished,” he said. “I came into that screening fulling prepared to take a beating, but I was gratified to find that people appeared to be pretty happy with it.”

He said he’s also shown it in New York and Los Angeles, and people who were originally from Appalachia attended. Their response was very positive, he said.

Some film critics have not been so positive. The film is rated “74 percent fresh” on the website Rotten Tomatoes, which aggregates reviews from critics and viewers across the spectrum of newspapers, magazines and the web. While 74 percent is a decent number of Rotten Tomatoes, some of the individual critics were less than enthused.

“This is one of those films in which people on the edge of poverty and battling addiction still look like they walked off a Hollywood set,” wrote Brian Tallerico of RogerEbert.com.

While he said being a filmmaker requires a thick skin, reviews like that by Tallerico seem to get under King’s skin. He questioned the validity of the opinions of “big city critics who have never been to Appalachia.”

“The way I read that is, ‘So you don’t think regional people, or poor people or people with issues can be attractive?’” he said, adding that it as though those critics have watched films that do portray people in the region negatively, and then are “met with a film that doesn’t meet with the stereotype and then assuming the film is wrong.”

But with a 74 percent fresh rating, many of the reviews are much more positive.

Wendy Ide of Screen International said, “It’s an atmospheric portrait which, while leaving several key story strands underexplored, does convey a vivid sense of the support system which powers and protects these lives lived on the periphery.”

And John DeFore of Hollywood Reporter called it “An unsensationalized look at moral compromise in opioid-era Appalachia.”

King is not from the region. Born on a military base in North Carolina, he grew up in southern California and Chicago. But he has made extensive use of resources available here — the stunning landscape and people who guided him through the pitfalls of filming in a place long portrayed in a way that has upset the residents. That Cole, the main character, is a drug dealer doesn’t fall into the stereotype, however. He tells himself he’s a Robin Hood, and King said he was trying to convey the conflicts of the bad things he does and the good.

“I think Cole is a person who has a lot of the conflicts. I think he sort of downplays the damage his actions as a small-time drug dealer are doing,” King said. “Over the course of the film, I think he’s forced to kind of admit he’s not as innocent as he thinks he is.”

The movie is based on a book of the same title by Carter Sickels, who King said is ”very good at conveying the complexity of life in Appalachia. It’s not just black and white.”

“ The Evening Hour” premiered at the Sundance Film Festival. It will be screened at the Baxter Avenue Theater in Louisville Thursday night and Friday night, and will run for a week. It will come to Harlan on Saturday.

The Whitesburg screening will be at 7 p.m. Sunday in the Solar Pavilion. Seats will be socially distanced and masks will be required. King will be in attendance and will take questions after the movie.